The Tao of Multimedia 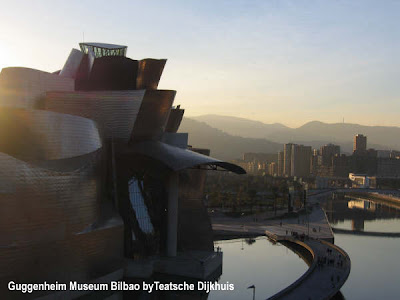 What's the Guggenheim Museum Bilbao got to do with Multimedia?

Following on from the Tao theme - an article which I hope adds to the debate about producing Multimedia packages and how one might go about it. I quote a number of very well meaning people. It's a bit longish but I'll post some bits here in a couple of days and the main article on viewmag.

Meanwhile here are a few passages that give some flavour:

1)Interactivity and Multimedia is part logic, part dysfunctionality. That's because our comprehension of language, our sense of narrative is linear and as follows logical. The Whorf Sapir hypothesis describes this simply as language shapes the way we think. The way we speak is logical and so we have a tendency to present themes in this manner.

2)Mutimedia and Interactivty is more than divying up linear features and placing them on a timeline. It works at an intuitive level if you're one of those people who thinks interstially, sees an object and can think up seemingly unrelated links at first sight which have depth later, you may make a good multimedia producer.

If you're too logical, apply to CNN as a reporter. TV reporting is about resolution and closure

3) In 1995, a residing New Yorker showed how multimedia is a multiple sensory affair and at its core structure IS considered Art. Auriea Harvey, a graphic designer and artist set the on and offline world alight with her work which would also grace some of the best museums.

When I stumbled upon Harvey in 97/98, she was a wave of new fresh air. Her site has since changed; I confess I liked the earlier one. But she wrote rules that did not exist, she created forms that were fully sensory and immersive. I kept a cutting of hers on my news desk for many years. This, what she does, leads; as opposed to the many of us that follow.

4. Early cinema early contains some allegorical forms of how Multimedia would come to see itself 100 years on. Watch
Uncle Josh at the Moving Picture Show Directed by the cinema pioneer Edwin S Porter in 1902 and Life of an American Fireman.

And who are the latter day Gladiators?
Posted by Dr David Dunkley Gyimah at 1:40 pm