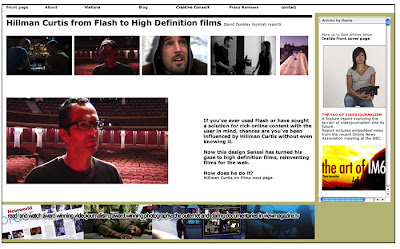 One of the interviews I looked forward to about this time last year was with Flash web designer Hillman Curtis.

If you have no idea who he is; I didn't in 98, then google him. He is to Flash Design what Rageh Omar is to news, cool and a leader with a pioneering style of his own.

I'd read on many occasions his self-taught style to film making and in particular how he ballsed up on one or two. Sure enough, candid and self effacing he said what resonates pretty loud with me.

"I messed up a music shoot badly. I know what I do well, so best leave music shoots to others".

I have just finished a music shoot for a friend and was TDB yesterday. TDB an acronym from my school boarding days - working Till Day Break. Having got back from a really nice gathering with the FT ( Sorry Financial Times) at midnight, I thought I'd give it a ago. 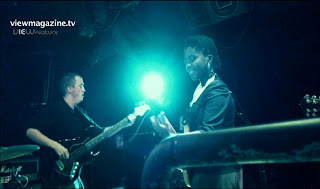 An hour in and I'd got this segment sorted. The shoot itself used two cameras; one from my colleage Kienda Hoji as I roamed. The logic is to lay continuous track on the number you want and then find appropriate cutaways, elsewhere.

But as you know Pop Music has an edit rate that would give your grand mother an aneurism. But really there's almost a template you can work from to produce a relatively ok video. I had my 12 year old nephew up to speed on his own within an hour.

Not so much then the pop video itself; sorry Like Hillman I'd rather create something else, it's the versatility of Vjism which deserves a mention. Short news formats; long one hours; series; pop promos; ads; and a car show.

My parting shot though should go to where it's deserving; the artiste Nancy Ginindza who's music inspires me.

Posted by Dr David Dunkley Gyimah at 7:43 am