In the week of UK-Africa investment, Dr David Dunkley Gyimah, voted one of Ghana’s most influential people in the UK, reflects on his visit to Ghana to find it boxing clever and taking on heavyweights 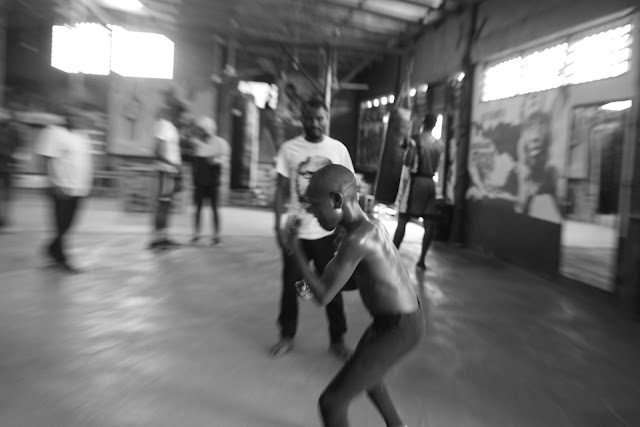 He’s tipped to be Ghana’s next sporting boxing megastar, and embodies the characteristics with which Ghana is being described via boxing metaphors. Sporting allegories befit some countries more than others. Ghana is one of them. Not the worn tropes, “punching above its weight” more “shaping up” and “boxing clever” on the international scene.
The country’s pedigree in the sport is legendary. At the nondescript venue The Gym in the capital boxing legends, such as former World featherweight champ Azuma Nelson trained here. On the wall is a photo of another World Champ for whom I was his cinema journalism filmmaker during his epic fight with Mike Tyson for the undisputed world championship. I would accompany Lennox Lewis to the UK Ghana High Commission en route to Ghana. 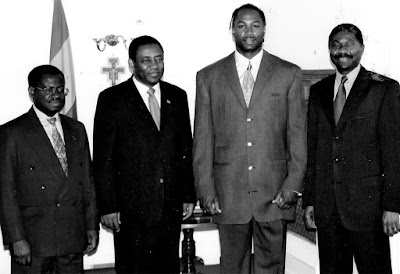 Ghana’s economy is catching world attention. Growth saw movement from 5.6% the previous year to 6.7% GDP, just shy of its forecast, but making it one of the fastest growing economies, alongside Rwanda, Ethiopia and Cote d’Ivoire. How the turn around? Oil revenue, and the further discovery of off-shore fields, pumping out their liquid resource is one, just outside the capital there’s evidence of another, which will play well into the dynamics of the African Continental Free Trade Area (AfCFTA).

On the outskirts of Accra, I meet CEO Francis Osei of ISEO’s Agricultural consultancy. In just two years, deploying tech, world expertise and home talent, he’s created one of the largest Maize farms in Ghana, the size of 6000 football pitches. It’s a template that has attracted interest outside of Ghana and he’s preparing to scale up. 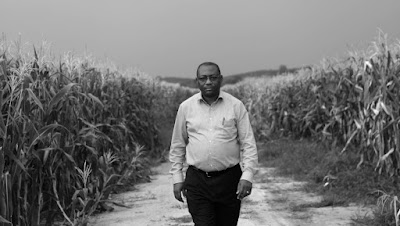 There’s a knock on effect for job creation, manufacturing and services adding to Ghana’s domestic GDP. Government policies reported by DW have also acted as fuel for growth. But as in boxing parlance a round is not the match.
Ghana’s heavyweight status has materialised over a lengthy period. Trade and current account deficits, mounting external dept and poor growth has often been the mood music. Twenty eight years ago, I reported for the BBC on US Secretary Ron Brown’s foreign direct investment (FDI) visit to South Africa, to stimulate its economy. The rub? Multinationals were drawn to the country’s favourable market policies but the impact on local jobs and the GDP were comparably minimal.
Ghana’s flank exposes similar patterns and requires forethought. Several more multinationals attracted by trading conditions are due to set up shop in 2020. Al Jazeera report

Nissan, Suzuki, and Volkswagen will open plants in the country in 2020, transforming the region into a hub for the African car industry.

Part of the pull is Ghana’s spend against its revenues coming under check and efforts to clamp down on commercial corruption. A friend, who’s a senior executives at a high performing multinational, has hit on an ingenious scheme for transparency and due diligence and its making and impact. We’ll report on this in the future.

My late father was part of the wave of Ghanaians who left the country soon after independence, swelling and popularising, like so many others, the label of “diaspora” — which the present government last year designated the year of homecoming for the many dispersed. It attracted, and continues to draw attention. At Elmina castle, where last year US House speaker Nancy Pelosi and 13 Congress members visited, photographers approach us and we share a conversation.
They request we pose and moments later will appear with the prints for a fee. I thank them and also suggest politely they’re missing a vital component of storytelling. Rather than capturing events for as representation, they might do so for the drama as documentary photojournalism. It’s the story and emotions that country’s lack when telling their grand vision.
In the city, the Overseas Development Institute is training young people in documentary photography, as well as an assortment of skills. It’s encouraging to see. Youth and employment are rousing themes in Ghana, with the president acknowledging there’s work to be done, particularly in educating the next generation, training them and helping them find jobs.
Perhaps one of the biggest stories which should have global recognition is caught in what could be termed “Start-up stasis”. Ghana’s government has made education free for students to secondary school. That’s a big deal and politically requires traction. Unesco’s 2010 stats says eight out of every ten 15–24 year-olds is literate. For the over 65 years-olds that drops to three out of every ten. That’s a huge story to champion and sell which which should impact skills.
Parallels with South Korea come to mind when in the 1950s the average income for South Korea and Ghana respectively was $490 and $491 respectively, by 1990 South Korea was $4,832 to Ghana’s $481 — a ten fold magnitude jump. South Korean boosted learning and savvy businesses.
MEDIA
Media is one of Ghana’s success stories in its matured democracy. The air waves reflect a liberalism and free speech, unlike many other African states. I’ve arrived at a time when there are ongoing talks between the media and government over press freedoms and the protection of journalists. In the offices of Joy FM Ghana’s leading independent stations I’m introduced to Israel Laryea — one of the country’s most prominent newsmen courtesy of one of my former Masters students.
It’s clear from when we start talking we share mutual interests in, amongst others, an old friend I’ve not seen in 21 years, the former BBC Ghana correspondent Kwaku A Sakyi-Addo who now heads up Ghana’s media regulatory body — the equivalent of the UK’s Ofcom.

One of my first project in Ghana was in 1997 working with the then Turner executive Edward Boateng, whom is now the Ambassador to China. Together we launched Ghana’s national television’s Breakfast Show taking them on their first outside broadcast to South Africa where in the early 90s I was an Associate Producer for ABC News.
The digital entrepreneur and start-up culture too in Ghana is shaping up. Tech Nova writes that four Ghanaian start-ups lead the way for the Africa Prize for innovation. AfriTech announced several digital entrepreneurial schemes for accelerator funds. The challenge however to accelerate these program depends on a strategic theme favouring a different philosophy to nominal tech start-ups and that is the Chinese model of leveraging innovation and business supported by local government, rather than the organic growth witnessed in Silicon Valley.
I’m leaving Accra. The Arts centre is a microcosm of Ghana’s future. Craftsmen and women accost us for sales, driving hard bargains. They’re determined, persistent, and have a vision of what they want, but to expand it requires joined up and local government thinking. Unquestionably solutions are complex, but as my seller poses in his shop no. 163, I’m reminded. A country’s brand and character is shaped by the people. Can Ghana keep its up it momentum and how transformative does the various sectors set different goals. It’s up to you them to Keep jabbing.
Dr David Dunkley Gyimah was voted one of the top 40 influential Ghanaians in the UK’s Ghana Abroad. He attended Prempeh College in his teens. A former broadcaster, he’s an academic specialising in Tech, AI and Entreprneurs and runs the Emerging Media at Cardiff University. He’s worked or consulted in Lebanon, Tunisia, China, Russia, Egypt, India, South Africa, America etc. More on him here
Posted by Dr David Dunkley Gyimah at 10:43 pm