Not so different after all

On my way back from China, I encountered two vignettes, at polar ends, which made me reflect on my journey.

From Shanghai where myself and Geoffrey ( Head of Department) had finessed our networking, culminating in a whirlwind tour of the Expo, I was to find myself on the 8.50 plane bound for Beijing.

When the pilot announced some breaking news, she went into Miss Unbearable mode. She may have had a point, because by the time the translations made their way to us non-mandarin speaking, we would be dutifully informed that there was a three to four hour delay in our flight.

Meaning, we would have to sit in the plane for the said duration. My background in boarding school seated in the guard room doing nothing can prepare me for an assortment of mundane tasks, but the prospect of firstly a wait that could end up with me missing my connection, and secondly seated to Miss Urgh filled me with dread.

Still Waiting
At Oneish, having boarded the flight at 8.30 we were due to move. By now I had been reduced to a pulp.

At Beijing, a litany of mis-communications and bad decision making, to me very unChinese-like, would eventually lead me and others to our connecting flight- also delayed.

When we did board, I would be sat next to someone, the equivalent of my mother. She was unfussy and collected. We nodded at each other and then the flight took its course.

It's a long haul so to amuse oneself in -flight entertainment is a pre-requisite, unless you have a good book.

And while I feasted on film after film, I couldn't help but see how abject the woman next to me was.

I finally plucked up the courage and without a word said navigated her through her menu. She seemed amused and surprised.

I'd flick through a range of options and she'd gesture by pressing the icon on the window of the screen. We got it down to a fine art, except almost all the games she pressed were not working.

I found her some music, a Chinese Opera. It seemed agreeable, but she then gestured in the soft manner she had, to move on.

Eventually she gestured with palms open that she'd had enough and I repaired to my own space and another run of Avatar.

Experiential Learning
And then something nice happened which I caught with my periphery vision. She picked up her tuner and begun to navigate herself; she'd been studiously watching me as I tried to help, to the point I'm sure it wasn't that she couldn't find any programmes, she was building up her knowledge of how this tuner contraption worked.

I had tried to show her, but perhaps just like my mother she had not wanted to come across as a nuisance.

Minutes later I had a gentle nudge on my shoulder. I looked around and she, smiling gently, offered her headphones and nodded.

Chinese Classical Music, soothing, arresting and had I not kept my manners about me, might have held onto her headphones.

She smiled triumphantly as she took them back and for the rest of the flight I would notice a content look about her. Occasionally she'd change channels.

After landing, in the baggage room, I would see her again; our confined space now expanded, I swept pass her thinking how much my last encounter with China, embodied something I had witnessed all along while I was there.

A quiet deference and respect... and then just occasionally from earlier on an utterance of intemperance. Perhaps they are one and the same, but the truth, I thought reflecting on my own foibles and mannerism is that really we're not so different after all.

Journalism as it travels along modern art

"Modern art – Bathers by a river by Henri Matisse 1910

Yesterday we went to see the new Matisse exhibit at the Museum of Modern Art in NY.

(As we live on top of the museum, this was not so hard to do).

The exhibition has gotten rave reviews, and not being such great art historians, we took the audio tour, which makes life easier and far more interesting.

Last week we went to see RED, the Broadway show about Mark Rothko and the Picasso exhibit at the Met.

And therein lies the rub.

It’s a simple enough argument with a powerful antecedent, but, as they fought then, the wise men from the academy le baux, so they fight now.

History and time will perhaps show how evolutionary changes over a continuum viewed in say 2020 as a snapshot of 20 years of change, came to be seen as dramatic change.

That when the pinhole, camera obscura and any no of devices encouraged the faithful reproduction of the image, the impressionist tired with it all took up a new course lending towards their interpretation of events mimesism ( Journalism abandoning forced balance).

But we know they paid initially with barbed critiques and being ostracized by the “wise men”.

The new journos look like being the Cezannes. Their work make’s no distinction between factivity, narrative and art. But alas for a legacy generation, the lines between journalism and new journalism, and art, must remain distinct.

And that is a shame.. but I rather think Darwinism might win the day.

NB Apologies for the intermittent posts I'm looking to port over to a new blog system soon
Posted by Dr David Dunkley Gyimah at 8:12 pm

and then more new journalism 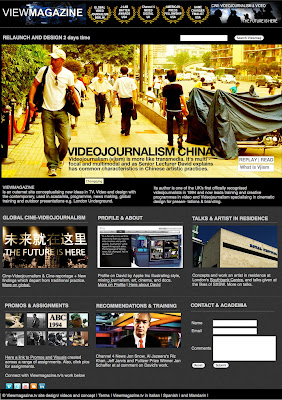 Sorry, if you're a follower of this blog, that there has not been much forthcoming lately.

I'm planning on switching to Wordpress, but have a few more things to sort out.

That should come soon after a redesign and complete overhaul of viewmagazine.tv including its brief.

A lot has changed in terms of personal branding and storytelling, with for me an emphasis on process and ideas rather than actual articles.

And these ideas will now tend to come to either nearer where you are or farther from this blog's place of origin.

I've maintained for while that this slow evolving paradigm takes its cue from everyone, not necessarily involved in the media and visual arts -a fundamental shift from the 90s when broadcast media or newspapers executives designed for us.

So look forward to seeing you and engaging in liveky talks.
Posted by Dr David Dunkley Gyimah at 1:32 pm

And so to the next journal

I arrived at SMARTlab - PhD gathering on a high, having just flown a 16 hour journey from China. The Tuesday did not disappoint as Nigel, Errin, and Bobby mapped out their direction in deconstructing autism.

The contents was comprehensive, its delivery clear, their ideas engaging and their methodology a revelation is crystallising ideas within the realms of videojournalism.

It's often said, by whom, I can't recall at present, that the generation of new ideas invariably involved transferring concepts from one discipline to another.

You might ask then the relationship between a lecture of autism and film theory, but the common ground was staggering.

They spoke about pragmatics, gesturing, expressive language and receptiveness. It sparked a theory of the mind in disseminating videojournalism film making undertaken in Chonqing.

In a nutsell it involves prefixed perceptions, observation, initiation, reception, recording and evaluation and a re-evaluation before asking how your perceptions met with expectations.

Zann's elucidation of the collective and collaboration asked questions - some of which still needs answering.
Posted by Dr David Dunkley Gyimah at 11:01 am