I think I have spotted a misconception amongst broadcast news and newspaper professionals regarding the use of small cameras and their standards. 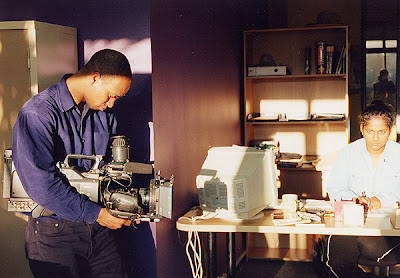 This is the digibeta dvw 900 - a beast of a camera which I've shot with - as a video journalist- extensively. (I'm about to post the film I made for Channel 4 News on viewmag)

The quality is great- viewed on the oscilloscope.

The lens arrangement allows you swap lenses and attach various filters across its matte box to get dramatic shots and also incredibly field of depth which Hollywood relies on to get you into cinemas.

In a crew or shoot you can look very very important.

But, you'll be hard pressed to run with it, unless you're one of those alpha camera person types. And it doesn't do small spaces. And, and forget it if you were thinking off walking into that presidental rallyin Zimbabwe incommunicado believing no one will spot you.

Here I am filming a long feature for Channel 4 News, spot the camera just by my side. 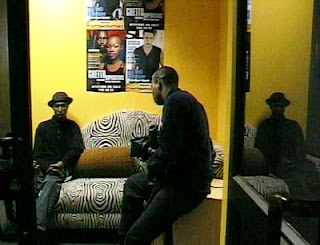 Now, these smaller cams that you've probably seen me with on Viewmagazine.tv are just peachy!

The pros will tell you they're not broadcast standard, and strictly speaking they're right put through that oscilloscope gizmo thingy. But unless you're Schwarzenegger's Terminator with that laser eye, you won't noice any difference, if shot well.

Where sometimes it is discernible on TV you'll spot that milky look. I won't go technical as I probably won't know what I'm talking about and someone may well eee in telling me "I'm rubbish". But anyway, if you're going to one of those electrical shops to buy a camera costing around 500 UKP, and it still says 3ccd, then in the camera's pants for getting rich colours.

Sony's A1 - the baby - cost around 1600 UKP, then there's he Z1 more money or the canon and then the daddy of small cameras is the Panasonic which shoots 720 p.

Won't go technical again, but it's the same near camera used in "24" - Jack Bauer, and various other high end productions.

With a small camera, here's the ff:

1. You're not important.
2. You're more flexible - you can run.
3. There are multiple positions of ease to carry the cam, other than on your shoulder, which we, you wouldn't do anyway.
4. You can't change the lens, but can attach a matte box with filters.
5. Cost is nothing compared to the big uns.
6. You can work difficult spots and go UNOTICED sometimes.

"Hey leave me alone, I'm just a freakin tourist"
"Is this not a picture of you sir on you blog, showing the work you do?"
"Hey man, that's my twin".

So you see the quality issue boils down to the person behind the camera. Stephen Sondenberg and many other top flight directors have used them for indies etc. And my good mate Claudio Von Planta has abandoned all his cameras to use the A1 for documentaries for CNN International, Sky and Al Jazeera.