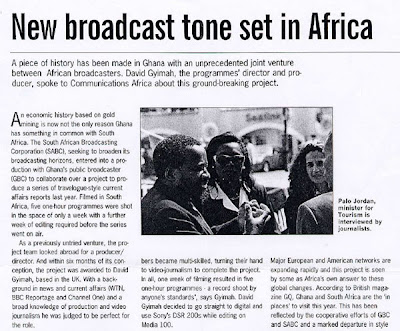 I'm so excited by this.

Finally technology has become a friend in need, indeed.

It sounds a grand idea. It is and exist in some guise for the BBC, CNN, Sky, Al Jazeeera - and many others have global posts in territories.

Probably one of the most ambitious ideas I have been involved in, which I would drop everything to replicate as the kernal for greater understanding.

Take journalists from Ghana, many of whom had never left the country before and take them to South Africa. And in time viser versa.

A coproduction no one had attemped before. Two nations that have so much in common but are seperated by. . . ?

Now finally, I can bring you that unique broadcast: The United States of Africa - a rich seams of programmes that demonstrate something awesome: broadcasters who have a measure of their constituents reporting on matters that aren't driven neccesarily by news but social relevancy.

There's an elaborate write up to this, which would probably make a book. But less speed, more haste.

At a WeMedia summit at Reuters last year, I became impassioned, even angry telling the audience that Africa, anywhere and our lack of understanding e.g. The Taliban, the this, the that is not a sympton of technological differences any longer, but ignorance.

Wild, wild ignorance. Fo every piece of new stock the big broadcasters are buying in, take the old if you want and lets use it in the fashion this idea illustrates: a UN style of broadcasting, designed to add to knowledge, than take away - and believe me that is being done.

This week I'll post the videos which includes some fantastic insert footage part of the broadcast e.g. Stevie Wonder playing for Mandela, A Boeing 747 in the studios with a slew of stars emerging, the first Ms south Africa to get to the finals of Ms World, a day in the life on the new immigrants ( we spend an overnight with Africans huddled in a flat whom the nexy day eran a living as traders. One of them had a PhD), a history of South Africa linked to Ghana, and much, much, much, much more.

Like I said Technology has finally caught up with us. And the second most amazing thing, the Ghanaians in this broadcasts learnt video journalism in 3 hours.
Posted by Dr David Dunkley Gyimah at 10:45 am