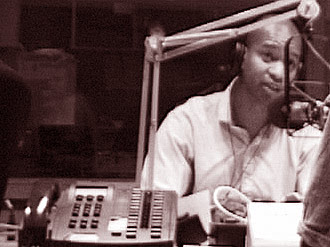 Watched a great report on the BBC about soul music in the UK and how it took from the US and redefined its own ID. If you're from that time and you happened to have danced on Soul Train, The Wag, Legends or the Cat in the Hat, howdee. Great times those were.

Prompted me to have a look at my shelf and archive and there were a couple of ROTs ( recording of transmission) from when I presented a news entertainment show on the London BBC station, then called BBC GLR.

Some great pieces to reminisce Juice -a film by Ernest Dickenson ( Spike Lee's cinematographer) which is playing on viewmagazine.tv now; a small clip - can't find the main body of a 40 minute interview - with Louis Farakhan from the Nation of Islam, and some live music.

Back then the world was a different place. It was difficult to get into broadcasting; even more difficul to host a show. I have one Gloria Abramoff to be thankful for giving me the room to experiment and learn stuff that would be unimaginable today.

It would be a shame to let those interviews go to waste so I'll start to digitise and play them out. It includes Walter Mosley talking literature, and a radio documentary I made for BBC Radio 4 during my last months of an 18 month stint in South Africa.
Posted by Dr David Dunkley Gyimah at 10:51 am