The secret of TV-Net success. What the TV agents say 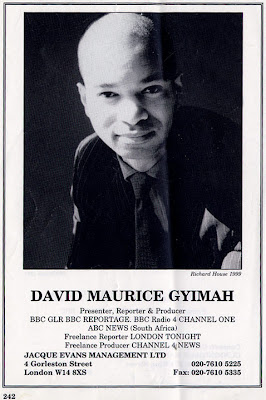 But fret not whether you've not yet joined the fray, because it still may be you.

For most outfits producing video costs a bundle. For you and me on the net, next to nothing.

Producing TV/video isn't exactly rocket science, but something else, an ethereal quality, a something which you either have at birth (David Chapelle), acquire through steely determination ( Madonna) or buddy up with someone and be desired by proxy.

But this post is about news information and as such what is it we're supposed to be looking for, from:

* the news/ feature presenter
* the production.

What the agents say

I have had the chance to speak to a number of agents in my career.

One, Jacque Evans would subsequently become mine for number of years. We sadly said a tearful bye bye when I wanted to abandon front-of-camera work to concentrate behind.

Also the TV market in the UK is terribly deterministic, "Oh really (shrill) who did you say your dad is?" - that as well, it's pretty small compared to the US market and is increasingly becoming risk averse.

The pressure on any TV boss to create a hit to sustain their career is such they're likely to look for bankable winners to front their programmes, which is why you see the same faces across different progs.

They have what is either called the X-factor or as Cuba Gooding Jr's character would pronounce in the film Jerry Maguire, "the Kwan".

At present there's probably predetermined mixed with random routes to net video sites. Predetermined comes from your current constituents. They'll come to you come what may. They are the brand groupies ( sorry that's an ad term I came across working in advertising).

Most execs however are also after the "randoms". Those that would never have considered you a friend, but drop by and stay. They in turn bring in other friends and so on, and over a cycle also become "groupies".

Hopefully by then though the brand would have evolved to keep old and new friends together. Channel 4 News is one such brand that has very broad cross appeal. If they visibly broadbandcasted with "outernet" concepts on the net, I think their stock would rise even further. (yes, yes I did work for Channel 4 News as a regular freelance producer, but it's a good show).

So here's my top ten observations trawling across many News-Net video sites this morning looking at presenting and production.

1. If you're a presenter *KISS and refine that script for your audience. Your audience has a quotient for witty, good turns of phrases. Too much though and it's a turn off. Also "inculcate" is a good word, but there is an easier choice.

*Keep it stoopidly simple - actually not that simpletonly simple but avoid pomposity really.

2. Deliver the script with pace. On paper three words make up a second and less really is more. Criticise TV as much as you/me want, but these really are tenants that work.

So slow down. Watch the BBC's Richard Bilton who delivers a master class in pace and style. There's only so much information anyone can take, which is why public speakers regulate their pitches often to three or less thoughts.

3. Deliver it with style. TV is a performance. Know how to sell the tell, using body language and voice inflexions. Looking dour, rigid even with a killer script most likely won't cut it down the line.

4. What to wear. Yep that's personal. But in the same way if you've never worn a suit to an interview, chances are your interviewer will spot that when you pitch up. Body language gives away how uncomfortable you are.

5. Love it, work that space and fill the frame. Not exactly when you're in a killing zone. But show you care about your work.

It's remarkable how many reporters are thinking about something else during a report. Amanda Congdon in this article I shared by proxy in the UK Sunday Times, may not have been your cup of tea.

She wasn't a hard news teller, but she showed she cared about what she was doing(in a witty haughtily, self mocking way). And the good people at storybridge.tv have it all sown up. So stop standing like you're tied to a pole.

There is a reason why photographers ask you think about the scene you find yourself in (e.g. happy thoughts) when photographed.

6. Care about your pictures, slapdash them together and it's a souffl'e from hell. You're selling pictures unless it's an audio pod.

7. That cliched electronic background music, urgh, though this is a matter of taste, but it's akin to wearing flares - which yes might come back one day. Look for something original. Actually that's easier said than done which is why there's a music librarian attached to TV projects. But please don't mix Sophie's Choice over a cute girl named Sophie.

P.S. Have you noticed how over the last 6 years Hollywood has moved on in scores and is increasingly using Middle East/Arabic chords to highlight tension in spy genres, when it was absent before then.

8. Multiple pans saying nothing. TV's canvas is broad, the net's watchable window isn't so the language of TV won't always work. Right let's try a pan here from er, where to where?????

Sorry I won't bang on about the language of video journalism, but it's the photojournalistic aesthetic that Cinema, TV, online loves. The heights of this include Black Hawk and Bourne Ultimatum.

In Bourne the director pulls of another feat, allowing the action to take place in the frame and manipulating the dynamics of the camera action to up the ante. My good friend Rob Chiu is also a master of this. If you've never seen his reel, watch this and exhale.

P.S I'm not saying every vid should look like Rob's. It's about understanding the film

9. Let the visuals at least marry with the script

10. Break the mould. Try something new. In time all news online will look the same, so what will make your production different to watch.


Foot notes: The net's big enough to gain your own audience so that the long tail is still to some extent aggregable to something big
2. If you're interested in talking about me helping you out post me at Contact
3. OK now you can pull my old presenter reel to parts.
4. I'm looking for a new agent - Oh yes. And I'll do a longer post on this soonish
Posted by Dr David Dunkley Gyimah at 7:33 am

I found this a good read, lets see how many of those who read this put it into practise.