BBC's Clash of the Gladiators - & TV/the BBC under attack 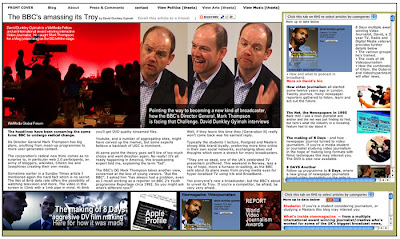 TV under attack, the BBC in particular Image from Viewmagazine.tv


"As you repeatedly say John"
...the attack on the BBC?
"Yes you've repeated this three times so far" (raising his voice).

"You keep on banging on about the BBC".

"John, you're legendary grumpy in the morning".

"I might have to ask this question several times".
"You seem to have already done so".

"Do you believe we're not making enough quality programmes to justify the (BBC) license fee".
"I didn't say that".

"We don't ask for the money".
"Well I don't you might do".
(Embarrasing laugh)

Absolute pure theatre. Take two of the BBC's most feared interviewers and the aformentioned is what you get. Don't ever say the BBC's impartial to its own. This could have been John Humphries interviewing Tory Michael Howard ( they've had legendary clashes) or better still an axe murderer.

But it was John (the rottweiler on the BBC Today programme) interviewing Jeremy Paxman, (the rottweiler on Newsnight) whom the previous night had delivered the MacTaggart Lecture criticising the state of televsion with a few salvos at the BBC.

Both men appeared to annoy each other, with off cuff remarks, and bar humbug tututs.

Jeremy's "You ( John) are legendary grumpy in the morning" will become the quote to haunt Mssr Humphries and provide much merriment for his foes.

If you're a journalism student find the podcast: a lesson in interviewing people you know. If you're a professional Jeremy offers some salutory tips on how to cope with a difficult interviewer.

Clear out a whole tier of the BBC was one of Jeremy's conclusion, and perhaps the BBC ought to be doing more for less another suggestion - when they managed to put down the pillows laden with lead.

Wonder what both of them are saying off-mike

Here's what the BBC's Director General Mark Thompsonhad to say about the new landscape and digitalia when I interviewed him some months ago.
Posted by Dr David Dunkley Gyimah at 8:12 am