Count Down to China 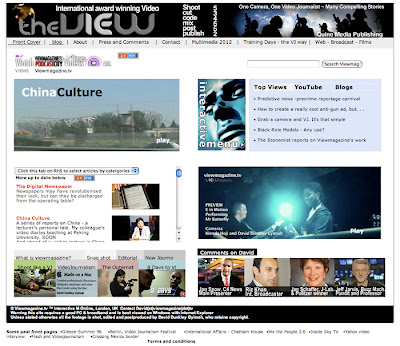 To coincide with China's Olympic countdown and ahead of a visit to China, Viewmagazine.tv will be airing ( good word that, since it's a broadbandcast) a couple of vignette reports from China courtesy of my colleague who has just returned from lecturing there, Kienda.

Two years ago as London geared up for its Olympic bid, one of its ambassadors, the indefatigable Jude Kelly, a figure I so admire, invited me to the top of Canary Wharf - one of the highest buildings in London to brainstorm with an eye opening group of people.

Everyone from the creative industries of one sort or another was there. Jude also gave me her video blog she'd made from Athens during their Olympic run. It's never been aired before so I'm looking forward to cutting it and linking it to a Kienda's China stories and a feature on another colleague and friend in the runnings for scoring for the Olympics.

What I really like about Kienda and Jude's video is the personal nature of the reports. That's what VJ does so well and so what you get is an authored report which include some truly interesting stuff.
Posted by Dr David Dunkley Gyimah at 9:36 pm