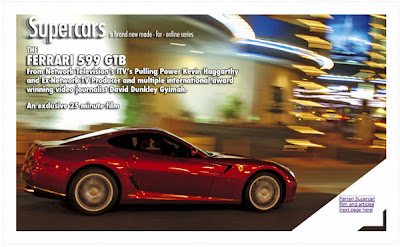 Some nice ees from you regarding the initial look and feel of the supercars pages.

We're going to be testing an initial ad space buy for this. We've got a number of high performance cars and invites from the EU. It's all a question of time really for me.

But I do like the feature we're considering of the school for mechanics - women only. They drive high performance cars and are shown how to deal with some of the more pernicious problems vehicle owners face e.g. changing tyre, spotting oil levels, changing spark plugs and

The first part of the film is up. The second will follow shortly.

Couple of things I have spotted. I have "crushed" the blacks to get this high contrast look, which has bleached the film in place. That's the effect I wanted, but has overcompensated on other areas with low light, so there are heightened shadows, where I'd prefer them not to be. I'll correct this by going back to the original rushes.

The original file size was around 3gb. So to get it down to 48mb and 55mb before artefacting and some fraying of the images, I have been brutal with the compression. I'm going to ease up on that as well.

This film is really about "look". On Youtube it looks aweful. Hopefully over the weekend I'll have the time to change and then reconfigure a panoramic 800 X 540 on a different server so you can watch it in full size ( Yummy). 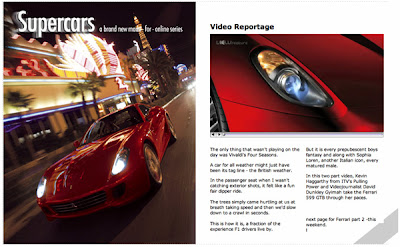 It will yield no difference to the story, but make the film much brighter. The gamma ( light) on a windows PC tend to, by default, display images that are darker when compared to a Mac.

But hopefully when all those glitches are solved and I have introduced sime rigorous SEM the site should begin to work itself.

Then if you are interested and you values/brand are smiliar please email Ads@viewmagazine.tv which gtes looked at by Kienda - very nice chap.

And he'll do some whizzadry pokery of calling you back. There, hard sell done.

Back to creative and why Multimedia is about playing with time and space rather than entities.
Posted by Dr David Dunkley Gyimah at 11:04 am