The beauty of video 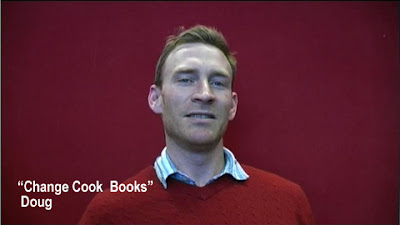 The beauty of video isn't just its aesthetic but its true power and simplicity; the progressive capturing of reality. We could take an array of software to produce the likes of 8 Days , but you'd agree that sometimes the simplest is the most powerful.

Take a camera, choose a backdrop and ask a simple question.

In this case it was if you could chage one thing, what would that be?

The students then, that answered this were untainted; their views crystal, their honesty obvious, their heads and hearts ruled.

Who knows, but as they climb the totem pole of journalism, will their views change? So for me as much as them, this is a tad anthropological - a freeze frame of history. No, really their history, when they might ask themselves in years to come, was I right.

In1992 I did the same with a 13 year old uncertain of South Africa's future. She lived in a small town near Pretoria. Here's veronique back then in Through the Eyes of a Child

The piece is equally dear to me: I'd barely been in South Africa when one of the top independents asked me to produce direct this with three day's notice and a turn arounf of two days. .

Fast Forward today. This observation of ones views is more acute in politicans, who start their careers with an alacrity to change the world. Few survive the course with scruples.

As journalists we all go through a pupae phase - almost akin to Stephen Covey's dictum (Seven ways of Success): dependecy, independency, and interdependecy.

And along the way, do we really change. Will this generation born into the web mass-niche media alter its views to accommodate the traditional generation?

Itumelang - one of South Africa's dynamic twenty somethings said something that was neat explaining change in South Africa. "We've had a political change, but not a social one". Ditto Journalism?

What will become more important? So far, the environment, social interaction, the "us" culture as opposed to the didactic era of Thatcherism and dare we say Thatcherism. 2.0 (Blairism)

Of the Masters students in this video, many are doing well. Sub editors, and editors-in-chiefs of lively journalistic organs.They hail from four corners of the world. It was a thorough joy teaching them,as it was the out going group this year. I tip my cloth cap.

Their curiosity welded the old and new, the future and the now, and a freshness that we as cynical journalists admire - for once we were honest truth seekers. Yes, many of us still are, but the knocks of the profession, the relentless culture which often eschews what matters for what is tantalising is burdensome.

When a daily paper can run misleading headlines of Sharks off Britain's coast knowing it's not true, but bask in the circulation of a three fold increase in sale, you're inclined to ask the question again. What is it we do?

This isn't frivolity, but a microcosm for all things that take up space doing nothing in particular. So go on. What would you change? And if you happen to record it, will it stand the test of time in years to come.
Posted by Dr David Dunkley Gyimah at 12:54 pm