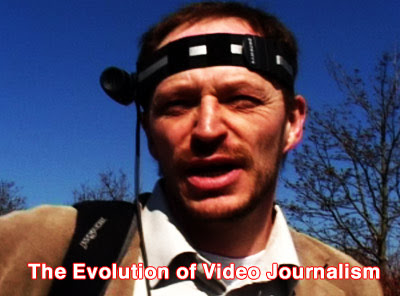 Like now everyone's doing some kinda VJ for their b. (broadband) network. Yeah I got commotion, AE( After Effects) and Silicon g ( Silicon graphics) on my lap. That stuff like, hey Ji, what's that film with those robot type things.

Yeah yeah Transformers.. yeah I can do that on my lap now.

Vjism.. well no alternative. I mean wots so difficult about that. Aint rocket science. Shoot and make a film. You get apps like "making things" ties into you can do some crazy half ***t.

We did a reverse time lapse when there was a flood down south. Yep software tracked into geo sats and did a linear line map, which we could use to show what was going to happen next.

I mean the VJ paradigm is a culture and an an attitude. We were trying stuff that everyone said you guys are nuts. Craig here linned up 12 cams wified into his main panasonic. Got this shot that makes that crazy film, The Matrix look tame.

Last count there were about... I dunno.. 10, 000 of us and I'm talking this region alone. Guys making good money though, but they know what to get and how it works.

We're doing predictive news now.. crazy huh! Gota shoot in a couple of hours.. some black dude wants to be the second US president... yeah so me and my team are swarming him. Ok! yeah is that enough for you. Catch you.


Postscript
Dogtown and Z boys were a group of Santa Monica skateboarders who radicalised skateboarding in the 70s resulting in the world phenomenon it is today. Just imagine if they'd been Video Journalists and it's 2014.
Posted by Dr David Dunkley Gyimah at 12:38 am