At best its dubious, but here goes. If you look through the law books Regina Vs Dunkley ( actually I have changed the name) you'll notice a test case involving the use of DNA fingerprinting to resolve a paternal suit posited by the Crown Prosecution Services.

To cut a long story short, the evidence using DNA fingerprinting for the very first time in this way left the authorities in no doubt as to the veracity of our case.

So, I was one of the very first people in the UK to have a DNA profile showing necessary markers. Yep this was Gattaca. 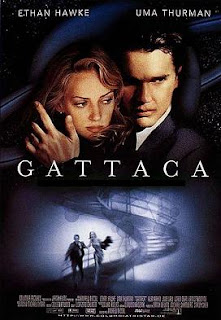 In the purest way I have never quite considered myself a jobbing journalist; something about Art gets in the way. So I started manipulating photographs of my gene map sequence.

It's imperceptible, but if you look at the reel here, you'll just about find elements. There's no aesthete to the reel.

But since the reel is the DNA of my work and this one actually contains my DNA ( a photograph) there's some self artistry involved.

Show reels are peculiar pieces of theatre. One could quite easily question their use. At the launch of BBC 3, one producer tracked me down after seeing an article of some Londoners in the Evening Standard.

She asked for my reel and I would have given her something along these lines ( this one's more recent). She says they all looked at it and went er, so...

As Robin Wiliams would have said to Will Hunting "it's not your fault". In 2000 the idea of creating visuals like this was perhaps considered plain wierd. Even for BBC 3. What are we to glean from this?

Have things changed much in the industry? You could argue, a bit, but like your DNA code some things perhaps never change.
Posted by Dr David Dunkley Gyimah at 2:53 pm