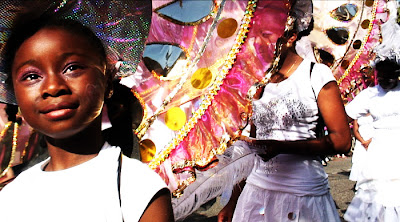 Europe's biggest street party caught the sun and revellers as more than a million people took to the streets. . .
Elsewhere there were a number of arrests. A man is seriously injured from an attack.
There are renewed calls for the carnival to be moved, despite Hyde Park relieving the pressure by staging some of the steel bands. Wada wada wada

Call it Minority Report's precrime prereportage event - an affliction that will overcome many networks tomorrow reporting the carnival.

There's the TV way and the VJ Way.

Here's how an editor deploying VJs might have sorted the station's report, because in the short space of time I was there ( Gosh my feet hurt from all that walking) these are some of the things I picked up.

Locals
The woman looking demure unleashed a torrent of abuse at the stranger, who caught red handed waved ten pounds in front of her. He'd just crouched in her stoop to relieve himself, against her building and she was mad. "I don't give a **** what you're giving me", she belowed.

It's possible the woman would have been one of the few (in real reportage I would have asked her) not to have left her residency for more sedate surroundings until Europe's noisiest street party passes. Many residents boarded up, while others just upped sticks for the three days. 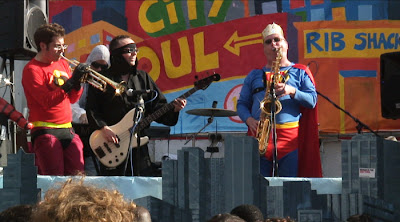 Participants
They were drenched in chocolate, an army of them; something to do with a chocolate brand celebrating ten years of sales, but the eye catching body deco would have to go to the angels and Egyptian theatrical- costumed youngster gyrating their hips in a fashion that outside of today's event would be considered very risque indeed.
Costumes of this nature take a lifetime to make. As the sun sets on one carnival, costume makers aree busy preparing for the next. It is a 365 day a year affair. . .

Pity the poor police enveloped in this aromatic essence, but unable to do anything about it, other than splutter. Not because they're choking, but because, perhaps their saliva must be draining past their oesophagus like Niagara Falls. . . 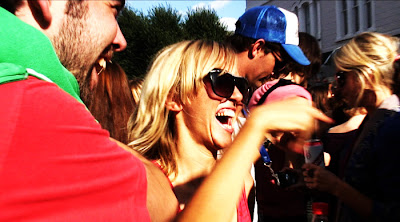 Revellers
Travel light and make sure you've had your vitamins; ear plugs aren't allowed. Carnival is here and once more float will do battle with float, band with band, skimpy tops and bare chested men all mixing in one big multicultural melting pot.
. . . 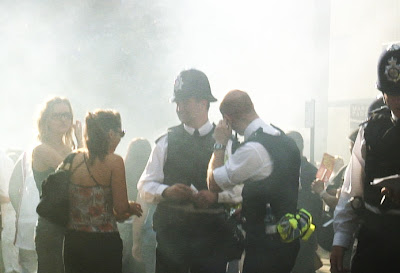 Police
Well we all know how to report this

BUT instead we're going to get: "Europe's biggest street party caught the sun and revellers as more than a million people took to the streets. .

The key is first person narrative, letting the camera find the story, and handing over ownership to those involved in it, rather than snatching comments.

Incidentally these pics are stills from my A1 sony vid cam in HDV mode. And I didn't go to the carnival to work. I'll dump some video on viewmag shortly.
Posted by Dr David Dunkley Gyimah at 8:34 pm