Is Television killing the Arts? 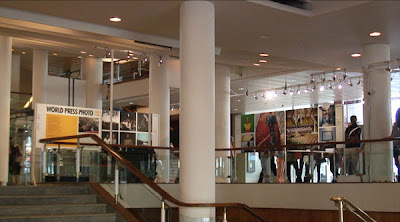 The Edinburgh Fringe Assembly Rooms director William Burdett Coutts is not pleased at the level of Arts television coverage.

I read this at about the same time, Metal - a dynamic arts think thank -
emailed me about setting up a new body.

The two events set me off. So I trundled down to the South Bank - London's culture metropolis and armed with my camera proceeded to put together a piece about what's wrong with Art and Television.

From what appeared to be a quick 3 minute piece, soon grew to a 7 minuter, exploring a couple of themes.

The overriding one for me is simple and I'll post more detail with the vid in Viewmagazine tomorrow. But here's a snap shot.

We know that in blogworld, citizen journalism, even fast approaching, now politics. So the piece I have made asking folk what they think makes that point.

It includes snippets of Simon Prosser, director of Hamish Hamilton publisher of Zadie Smith; a brief look at the wonderful photo exhibition at the Festival Hall; and then we whizz around to the Guggenheim in Bilbao.

Television's relationship with the Arts can only get better with a new constituent of producers and TV personnel who are able to see a new horizon, who can seperate high from low brow, who can make use of the long tail and hold their nerve and who understand that Art is not just a night at the proms, but an experience, which in recent times conductors have shown by allowing populist repertoires and jolly behaviour.

If the best we can do is to discuss whether its proper to clap in between a Mahler symphony, then the plot has been lost. Art and Culture must never be stagnant, but move with the times.

You could argue that TV has done neither and that this has not be helped by some custodians of Art whom may struggle to understand what a blog or video journalism piece is.

Post tomorrow
Posted by Dr David Dunkley Gyimah at 10:23 am