How to create a really cool anti guns ad . . but er. 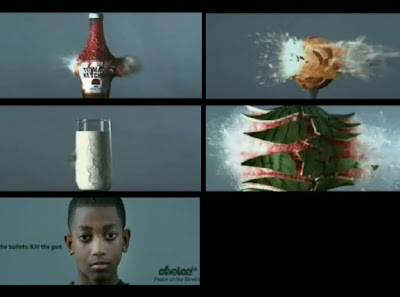 UK film company Therapy Films have just made a really cool ad against guns, which they shot in the US. No words, shot to a melancholic much used classical repertoire as a bullet pummels through various objects.

Trouble is for the audience it's meant to appeal to it will be as effective as a plastic knife on steak.

This isn't a criticism against Therapy, they've done their job. It's a good piece of film and technically challenging. It was approved by the client. Job well done. Er, £@^%

This reminds me of events in South Africa. A very close friend of mine who is a senior exec at Mcann Erikson Herd Buoys - one of SA's most successful ad companies - said at the official ending of Apartheid, that they ( ad people) might have to go back to basics to get their message across.

They now recognised they'd have to appeal broadly to a new constituent, which needed to be told "like it is".

Tarantinoesque
Having a bullet fly in super slow mo looks Tarantino-cool. That's a lot of cool. Remember the Radiohead video ( I think shot by Artem) or Wimbledon's playback camera at 1/1000th of a second speed or something like that), or the film "Day of the Jackal".

I'd probably want to play around with the camera myself. The IM6 Video Journalism approach rethinks ad/promo production in the same way video journalism does with news. One of the early thoughts is the audience live on the mobiles, they Myspace, they rarely watch TV, they're wowed by DIY video, music ones. So you want your ad to go viral.

Also, one of the reasons why the ad may not be as effective as it should is in all likelihood those you're appealing to have already been shooting off and and are fully aware what the bullet does. We've had series like CSI, ER etc to even give the bullet travel a hyper realistic fashionable look.

Ah, but our ad shows what really happens, you might argue. You could equally argue the actuarist approach. If I can get to one young person with this, we've done something.

Know your audience
If you really want a hard hitting campaign go talk to those with guns.

Where would you find them? Ok if you're really stuck, her Majesty's estate. And whilst there ask what shocks/draws empathy. Find out what negotiators call their "break point" - the point where something makes a difference.

The last shot of this ad, for me, makes the strongest point for empathy. A lone boy standing in the path of the bullet. I'd have pushed that line of thought with 10 young lads falling to the tune of 10 green bottles, re-worded or something, with each of the boys falling violently to the floor till there's none and then pics/video of funerals, because that's the legacy, people hurting really badly.

Also, the pre-teen fronting it is really cute and charming and speaks really eloquently. . . BUT. . . you know where I'm going with this don't you !@$.

OFCOM of course have strong laws governing ads and what can and cannot be shown, but one feels this one will be another oportunity missed. Actually you judge. Might even win Therapy some awards.

Age old question: who's the ad made for? Is Q there, whose film about this subject is doing the rounds.
Posted by Dr David Dunkley Gyimah at 9:37 am