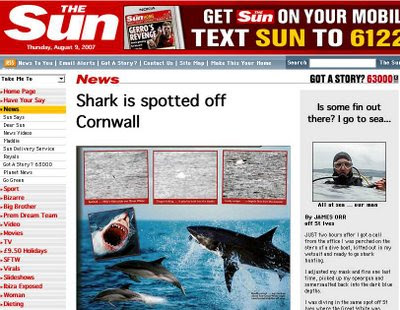 Before leaving for his two weeks of the exclusive island resort somewhere near the Fijian Islands, Super blogger and author, Crunch Time, Adrian Monck posted this.

The Sun got itself well and truly stung. Us TV types look forward to a full independent inquiry into how the paper was fooled and how it carried the hoax forward to its readers.


In a shameless deed of cross canabilisation, I posted this on his blog and just in case you're not one of his regular readers, posted my response here.


OK, so we won’t be holding our breath.

. . . but was it fooled? No one's talking. Well at least that's what being reported.

Can't remember where I read/heard, but what appears to emerge is the local newspaper which first showed the pictures had a circulation bonanza. So, The Sun?

Coast authorities are reported saying rather than deterring visitors and surfers, it's done the converse.

So could this not be an up to date version of The Sun's 1986 headline "Freddie Starr ate my Hamster" ?

It is after all the "Silly Season", though that's hardly true looking at other news events.

In the end you could argue:
* No one was injured from the piece's publication. No that's not a reason to publish unsubstantiated claims.

* Some (?) made a tidy sum from the event; the original photographer claims not to have profited.

*Our penchant for the occasional whaky story retains our chutzpah for eccentricity and the Monty Pythonesque: "It's a dead Parrot !"
!
* Tourism to the UK will be boosted as a result: Hey those zaney Brits are at it again.

* David Letterman will probably have done a sketch by now, thus aiding the Sun's brand quotient.

Letterman: 10 things associated with Brits that are just er, mad funny.
1. They put custard on apple pie and eat jelly, yuk! (bum, bum)
2. They soak vinegar on their chips. (Ba-de-bum)
3. They call the sidewalk, the pavement. (ping)
4. Soccer is football £@&*% (hahahaha)

5. They speak with a funny accent (Boo)
6. Body wind jokes are funny ( no sfx here please)
7. He has a blond flop, speaks with rotund vowels and wants to be Mayor of England.
What?
Oh he want's to be Mayor of Hackney.
Where then? C'mon researchers do yer work!
8. Beckam turns down movie role to play soccer (swoon. whaaaat. He's maaad)
9. They named this bell here Ben. No, it's not an ex-boxer.
10. More Sharks, this time in the middle of London. (Hahahahaha..that's funneee)
(whispers to Letterman) Er, yes they're actually at this place that used to be city hall.
Oh!

* Itt's invigorated further talk/column inches of "what is journalism?"
*And finally The Sun has a good stab at achieving google-rank supremacy with the word, "shark". One last push.

I reckon there are a couple of execs at Canary Wharf with a G&T in one hand and a mobile in the other to Kelvin MacKenzie having a wee giggle.

In front of them is Peter Snow's (BBC Newsnight) retired war pit and they're shuffling pieces around looking for the next big story. No sorry, that's some other newspaper exec (Black).

There are lies, damn lies and statistics. But then factually with this story we might never know.
NB: A footnote for someone's autobio.

BTW, did you hear about the network news broadcast which flagged up a pic of a very famous rapper with a reference to the dark side of pharmacy? Surely shum mistake.

p.s. Apologies for any typos in advanced Prof Monck :) Have a good hols Adrian
Posted by Dr David Dunkley Gyimah at 8:48 am

For your comparing pleasure...

hahaha you couldn't let it lie. You're on holiday :)