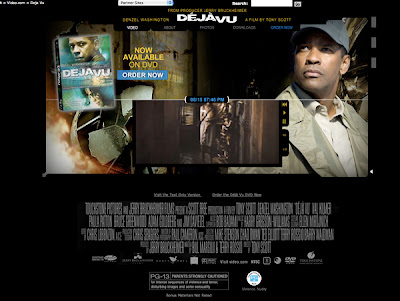 Rewatched Deja Vu - Denzel Washington again today. One of those films in the genre of Minority Report, which was a big influence in devising an Outernet interactive display - which viewmagazine.tv was just a part of.

The direction is as stylised as is possibly could be coming from Tony Scott. The scene of using "google Earth" resolution to whizz around the city was particularly enjoyable to watch. Some fine folk at a Californian University have more or less perfected that, and the point where the Deja vu Unit tap into a city cam, all doable. Now if they could just figure how to go through worm holes.

If I'm ever in need of inspiration, I turn to Apple's trailer site. Incidently, but then you knew this, most of the film sites use the same codecs you find in Final Cut - h.264

In the end it's all about experimenting and finding what works.
Posted by Dr David Dunkley Gyimah at 7:43 pm