the ultimate risks of video journalism 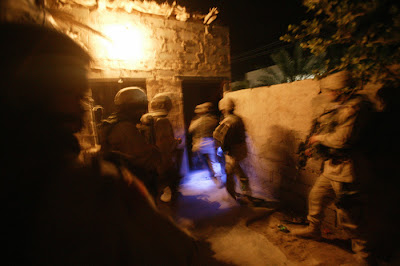 Yannis Kontos on night patrl with the US Marines in Baghdad

Nine dead in Burma including a Japanese photojourmnalist.

No one wants to hear about such tragedies.

And when journalists lose one of their own, it is equally hard to swallow.

If the mere act of going to work carried such ominous risks, it's doubtful how many would opt for this vocation.

Some however are aware of these calculated threats.

Katlehong
More than a decade ago reporting from the townships, I opted to go to Katlehong, then designated the murder capital of the world.

We signed away any rights apportioning blame to our hosts, a local peace group, should we meet a deadly fate.

The previous day, a dozen people had been shot.

While they're have been a number of journalists who've been sadly cut down, there's been a high ratio of photographers and cameramen who've been killed in action.

And it may well be as more and more videojournalists enter the profession, we'll have to introduce guidelines and be more stringent in our vigilance of their modus operandi.

Videojournalism's Risks
Video journalism and photojournalism share a lot in common, not least Cappa's famous dictum:if your pictures were not good enough, you were not close enough.

Camera operator may shoot from afar, aided on many ocassions by a second set of eyes; their reporter of producer.

As a videojournalist, you walk alone.

Meanwhile today I hear from a colleague: if you're a journalist or blogger associated with the foreign presss in Baghdad it's certain you're using an alias and you don't want to be captured on screen, for fear of reprisals from insurgents.

Getting to the truth is often a burden too heavy. As a journalist or journalist student, in these times you realise you're treading in large footsteps.
Posted by Dr David Dunkley Gyimah at 7:19 pm