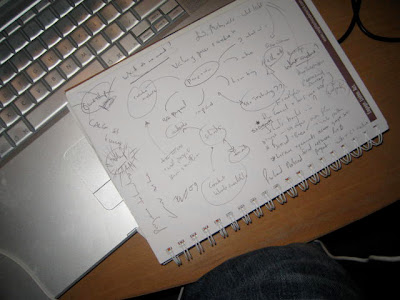 David's meme during meeting
Can't talk much about it, Chatham House Rules, other than it'll have great benefits for youngsters in media literacy. It's the sort of programme a university would love to own as well.

But at a meeting I started my meme map and thought this might be something we can offer students and other pros - no not the meme - but the aspect of project management that underpins driving multi-agency projects. 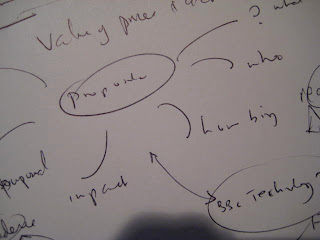 This isn't the first time in so many months that I have sat with BBC figures. Last year about this time, a colleague and I were coming to the end of a consultancy which saw us partner with the BBC's Online Journalism college to assist in the build of their flag ship training programme.

The University of Westminster did quite well out of that. In itself it represents a model for academia and business working together.

Three years ago, I convinced the then head of BBC Interactive that through a unique co-venture we (our) university could help map out a future of news

What I loved about that project was how I was able to rally students from different disciplines and with one of the BBC's Multiplatform whizzes Asha Oberoi ( She's now at ITN) push at what may come. The students presented their findings to BBC management 8 months later to huge praise. That's what I think Unis can be a real integral part of the market place.

This project is at the editorial propositional stage and thus begs lots of questions, so here we talk freely, feeling our way around and then start to put structure to building the blocks.

Good project managers invariably have many projects on the go and it's a joy to watch them, rationalising their thought process.

Meme diagrams work for me as often I tend to visualise feats What is it? What do we want from it? What do others want from it? Is there a win win - game theory? What's the plumbline ie the one thing that is central? How can we cut past waste, but encourage debate? Who are the players and what role do they excercise in a meeting? What's the phase? And how much will this cost?

Our final online project has me often saying lets costs students' time and resources so when they go to industry they're aware of cost-pricing issues etc. This is something I'll come back to later on in the month.
Posted by Dr David Dunkley Gyimah at 11:11 pm

Thank you again for all the knowledge you distribute,Good post. I was very interested in the article, it's quite inspiring I should admit. I like visiting you site since I always come across interesting articles like this one.Great Job, I greatly appreciate that.Do Keep sharing! Regards,
Write my RFP