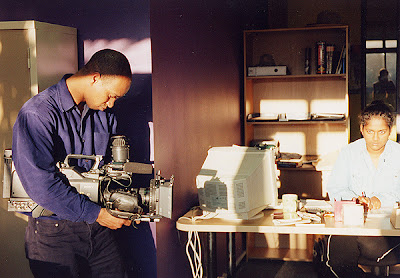 It is an incredible feeling as a journalist, sociologist, or an interested party to see change within a nation take shape before you.

The Civil Rights Movement of the US, Glastnost and Perestroika in Eastern Europe, Thatcherism and the politics of self - these provided genuine reflections of our changing attitudes.

Often documenting them yields first time rough drafts; a snap shot of history by the hand of the achitect.

Nonetheless they are visual documents for new generations to ponder.

Truth, I don't by any stretch think so grandiosely about this work or others.

But watching this film - a version of which was made for Channel 4 News - is a strong advocacy for videojournalism and  why we must persevere to tell non ageneda stoies.

The Successor Generation
In 1999 working as a freelance producer at Channel 4 News, I learnt the programme had no plans of reporting South Africa, five years on from its historical elections.

The most would be a short report from the studio.

So I did what many others I feel would do with 18 months prior experience reporting from the region in 1994.

In that year BBC Radio 4 commissioned me to make a documentary following the lives of four South Africans.

They were about to vote in their first election.

That documentary proved a huge success, which is why I went back and shot this piece.

There's lots today I would have done differently. That's progress.

But what they have to say here is still relevant today as it was back then.
Posted by Dr David Dunkley Gyimah at 2:44 pm