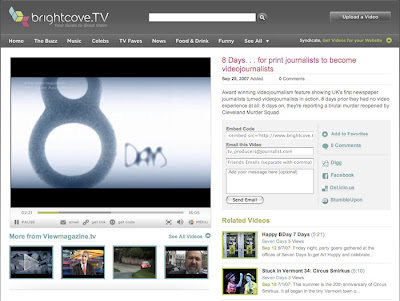 In one year as I recall I made nearly 500 videojournalism stories. Phew!

At the last conservative estimate at the studio I had some 800 beta tapes, 150 digibetas, 700 dvcam and countless VHS - that's a lot of stories, but I'll spare myself the embarrassement and try and be a bit more critical.

So here are some of the stories that are on viewmagazine.tv which I have now migrated to Brightcove, whose compression codec compared to Youtube is streets ahead.

Eventually the films should provide an interesting time line in videojournalism's many styles, which starts of looking like traditional TV before, something else...

The few uploaded thus far are more promo orientated, (something I enjoy doing from working in Soho) but here's the link, where a number of films I had to split into two for yourtube to get the compression right can now be viewed in their entirety. The Ferrari film for once doesn't come out looking like chewing gum.

At some point, I'll produce the Making of the film in Cairo between Robb Montgomery and me..
Posted by Dr David Dunkley Gyimah at 9:16 pm

I am glad that you agree that this hosted service is the way to go.

I feel Brightcove is the best solution for posting video content online. Their publishpod is da bomb for ease of use.

Hope all is well.

I bow to your advice guyss - thanks loads

Hi David I have recommended to several of my clients to use Brigtcove for IPTV and as online channel solution.

I like fact of ad sharing and the ability to customise the interface and use affiliate links or google adsense which you can also incorporate.

As you maybe aware of Brighcove refocusing their efforts on be a online video solution option click here as opposed to a video portal based business.

Brightcove UK/European office had a launch here in July, which was attended by Michael Armstrong of BET International, who have an online only channel called BETonBlast hosted on Brightcove, that I had covered here

Solutions like this combined with Web 2.0 and wikinomics means the most savvy who get the balance of content, marketing, online sharing, dissemination, social bookmarking and revenue generation will be quids, dollars, euros rich and what other virtual currency wealthy.

Will have struck the internet publishing goldmine.

Already there is a programme that I have been following weekly since September called "the next internet millionaire" click here its available as a weekly podcast as well. It's format is like the apprentice but can online watched online or downloaded.

The correct link for the below item

BETonBlast hosted on Brightcove, that I had covered is here