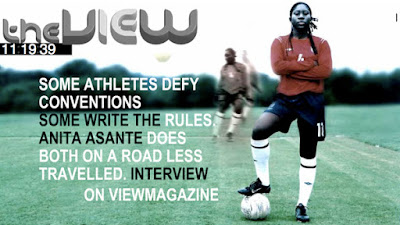 England's football (women) squad have reached the quarter final of the World Cup, but unless you're a die hard fan you probably wouldn't know.

There are many stars in the line up. One in particular caught our atention Anita Asante who plays defence.

*So Charlie and experienced cameraman /producer and I spent a couple of hours talking to her and you can see the results here.

We plan to update the story and run some of the out takes where she shows us up with her dribbling skills, but for the meantime here's Anita talking Football (soccer).

*This could have been shot as a video journalism package, but I suggest if you can always find a good camera operator and its right for the story, then take the oportunity.
Posted by Dr David Dunkley Gyimah at 10:57 am

Didn't I read some disparaging remarks about lugging around a Vinten a few days back?

No matter. Obviously there are shots that benefit from the larger set-up. You mention that VJ is not (just) about technology. It's also about technique. Technique is part technology, part style. But style itself is largely determined by technology.

If your camera guy was on the payroll how often would you say to him:

- hey I think I can do better on my own with my handicam? You go polish the Vinten.


BTW - Babel and Children of Men had a lot of phenomenal handheld work. I heard on Bourne they had assistants shaking the tripods to make it look handheld. A myth maybe?

Hahaha :) Oh that's charlie at Reeltime, an old buddy if mine. I'd knackered my camera on the day and there was no way charlie was going to give me his camera, so he shot it heimself. I ate humble pie directing

If you'd ever heard me on one of my training progs - hopefully one of the vjs will see this and weigh in - I don't do vintens, infact other than a small carbon tripod, I don'd do tripods at all.

Re: technique - you've gone philosophical on me, as I could argue over a beer with you that style - the way you do things - can be aided by techonology.

Ergot if you're a good cameraman, doesn't matter whether you have a nikon or leica - no worries we'll beg to differ here.

hahaha - the Vinten joke -now that's plain cruel talk. Charlie will enjoy reading that - incidentally he now has a Z1 - buut he loves his gadgets.

Babel yes- infact on many occasions it was just one camera. I don't think I buy the shaking tripods on Bourne.

I think on lots of the shots he played around with depth of field to heighten the unsteadiness.

If you look at 8 Days which I made last year I did the same. It's risky as you can lose the shot entirely, but a narrower gate from a zoom gives nice focals and that voyeuristic look.

Having said all this, GOSH, not going to post anything with old technology any more :-D