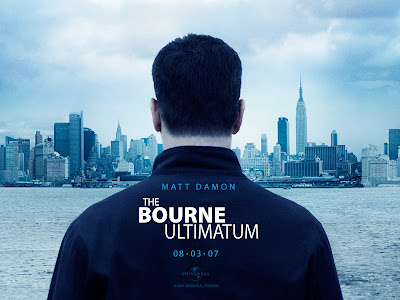 My working colleague had me nearly sputtering my tea. He said Bourne was rubbish. What !@$£* and went on to add that James Bond wot's that film called. . . was much better. Can someone help me out here? I was going to explain that the latest James Bond looked to be heavily influenced by Bourne but I thought "breath David".

p.s It's with great regret that I have to announce that the interview with Paul Greengrass ( Dir.) Bourne is off. I missed my window and as you'd expect Mr Greengrass is a very busy man, so lets be hopeful for another time in the future.

man I would loved to have heard that!

I'm not a big fan of Bourne or Flight 93 - but Bloody Sunday is all time best cinematography contender for sure.

Darn squared. But I'm optimistic that I'll have a better chance in the future.

Oh I loved Flight 93, but yes Bloody Sunday is seminal.

There's another director from the school of docs who you should look out for - same vein as Greengrass.

His name is Bruce Goodison. Nice chap as well. Made the BBC's SAS storming of the Libyan embassy. He was my director when i first reported at the BBC. Huh!

An interview when he is working on the "Imperial Guard in the Emerald City" would be stellar.

I remember watching the storming of the Libyan embassy live. Definitely some of the most riveting TV footage I have ever seen.

We'll give it a try. Cheers Peter