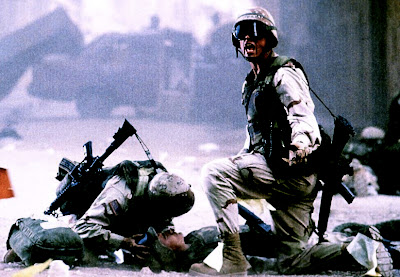 Black Hawk Down - a master class in video journalism, though Dir.Ridley Scott uses multiple cameras. It's even rumoured Scott had photojournalists on set as advisers. David occasionally cites this film to advanced video journalists as in this article for the UK's industry press gazette: In the Frame of Video Journalism

Most writers have a favourite writer they admire whose work they often ape for style and rhythm.

Most artists (painters) study the classics looking for clues to aid their own work.

Many musicians often start off learning the 'picks' of their idols

If you want to learn video journalism, first thing I would advise is pick a director or a show whose films turn you on.

Then watch it not as a viewer would, but as a technician.

By that, attempt to deconstruct their knitting style in the way the camera moves, the angles of shots established and the sequences.

Often when I watch one of my favourite directors I go into predictive mode.

My aim is to see if I can get into the head of their film, ask questions of their narative.

It's obvious I won't get anywhere near enough the shot directions right, but the execise opens me up to a different perspective of the director's house style.

Video Journalism is far from Television
Video journalism, unlike TV which follows a well worn format, has more fluidity about it.

You are the camera-director; something an increasing number of contemporary big directors have been doing for a while e.g. Mike Figgis, Steven Soderbergh, Robert Rodriguez.

And the truth is it's far more liberating to map out your own shot threads, which in turn should make you a stronger director working with a camera crew.

So next time you're off to the cinema or having a late night in; pick up some pop corn paper and pen.

Remember copying someone's work ( not plagiarism) is some kind of flattery. It worked for Tarrantino and Rodriguez
Posted by Dr David Dunkley Gyimah at 10:37 am