The Noddy Shot is one of the most prevalent shots in television, particularly Broadcast News.

Simply it is a reaction shot from an interview when there's only one camera. Meaning after you've finished interviewing your subject, the camera operators turns the camera on you and you nod - sometimes vigorously, often subtely- hence the Noddy. There are real ethical issues here made clear if you've ever watched Broadcast News with William Hurt. 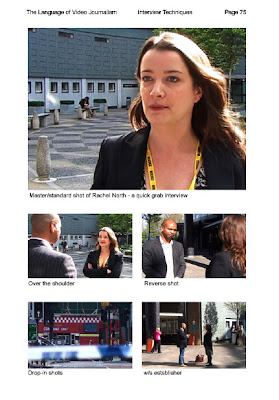 Why use the Noddy

More often it's used to hide an edit you've made within your interview. When you edit your interviewees answer, you'll have to mask that cut, otherwise you get this thing called the "jump cut": the person's head jumps suddenly from one point to another. So, often a noddy is inserted.

Often it's used stylistically - after so many seconds of seeing someone speak you want to break up the visual narrative - so it cuts to you.

Generally though it's used as a statement. You're saying that interview here, I was there conducting it.

The kerfuffle over the noddies stems from issues with at least two of the above, frankly all three really.

Firstly there are many occasions when a reporter/presenter may not have conducted an interview. It would have been done by a producer, but then the reporter later finds a suitable background for a reaction shot on him/her to insert into the interview.

Is this fraud? At the very least its deception - not my words though I agree, but as discussed on Radio 4's Today Programme this morning.

Secondly, scanning through the interviewees answer, a producer decides I like what he said there, don't like that, but like this second answer, so I'll cut and paste those together. From this edit, they'll cover the "jump cuts" with noddies and some.

This act though may just redefine what your interviewee has said, sometimes making them even more eloquent than they are.

I remember an occasion working in radio when a producer cut out thirty two stutters from an interviewee with a speech impediment. So there's an ethical issue here.

When used stylistically can you absolutely match your reaction at the time to when the the interviewe was being conducted? The answer is no.

Remember the clip in Broadcast News when Hurt is seen crying, Brook's character then says to the producer " How did he do that there was only one camera". So they look through thr B-roll ( US) / GVs (UK) to find him prepping himself for his camerman to cry.

So how do you know what reaction shot to insert where?

I'm not saying here that videojournalism is the key to solving some of the above. I'm saying the ethics of video journalism that I teach can be applied to help solve some of these.

Firstly, if you're not there as the interviewee, TOUGH! Find something else to cutaway to.

Secondly, why cut within interviews to make the producers point. The rule within parliamentary speeches in the House of
Commons is not to cut within speeches/replies etc.

If that's good for parliamentary and producers why shouldn't the same be applied to outside.

This is something I have come to acknowledge somewhat strongly.

Often the reason this cut-within-an-interview happens is that the producer has a different take, rightly or wrongly from the person who did the interview.

Secondly, as a videojournalist I can often tell people what I'm going to use, and in long formats, I take whole SOTs ( sound on tape). If I need a second SOT to make a point, I'll cut out of the inteview to a VO ( voice over), or actuality, then back in.

Thirdly, just how do you perform a sytlistic noddy edit? If I need one I tend to do it right after my interview.

Here I'll turn the camera on myself and ask the same question to ellicit the same facial response from me.

Also it needs to be contemporaneous. That's an absolute. The same applies with the over the shoulder facing the interviewee, I'll ask the same question again to get the reaction of the person looking at me.

An interesting note here. If I already have my answer, I won't let my interviewee get into the stride of their answer.

If they insist that's another thing, but what I want to avoid is hearing a reworked answer which may be different from the first and may force me therefore to redo the interview on a close up.

Truth is as a vj with no tripod, you're rarely think of using a noddy.

Someone's now saying, but you could have missed out on a brilliant response. I say, that's my loss. If It's not on tape it never happened.

If I don't hear it there's no loss. If a better answer was on its way and I hadn't allowed it, then I haven't done my work properly. Remember I have already preped my piece - part of the VJ way of doing things. See Financial Times Report.

Video journalism is photo journalism with a movie camera - and very often I doubt you'll ask the Photojo to er, "hey I like that angle shot you just did, can you do replicate that". If a response is ruined because of sound background, coughing, things beyond our control that's another thing entirely.

Incidentally, the reaction shot and noddies often take me less than thirty seconds to complete.

The politics of the noddies and its misuse is that is illustrates an arrogance of television, and at worst deceiving an audience.

Like I have said in previous posts, if you look back on the inception of TV News and its language, compared to say cinema and other Creative (small C) media, the language has changed little. If it's not broken, many say, why fix it.

It appears the transparency of the media sparked in no small way by the Net, blogging etc is revealing cracks. Hence the ban on the noddies now.

And what about television's hard and fast rule about starting off a shoot on an establisher - how silly is that!
Posted by Dr David Dunkley Gyimah at 9:21 am