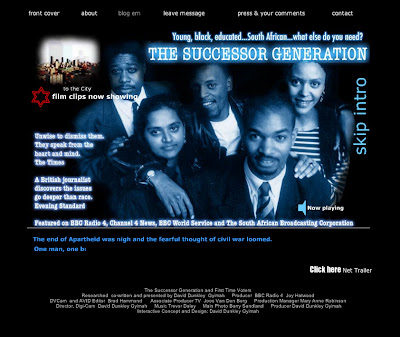 Take four dynamic South Africans who would vote in their first election circa 1994. Observe them for four months talking to them, recording them. That was the basis of a BBC Radio 4 Doc called First Time Voters. It turned out to be a huge success.

Believe me, it's a good thing radio allows for anonymity because geez they trailed that programme. I still get picked up for it, particularly amongst radio enthusiasts, when I'm in SA.

But that's not why I write

Five years later go back. Find out what's chnaged, this time as a VJ piece. That's the feature that played on Channel 4 which I can now show on the web.

Some time soon I hope to go back to SA to see how they're all doing and pick up some new material. I should have gone back in 2004, but alas. . .

What would be a step forward is to share the programme with other online outlets where greater social networking can be estsbalished and costs can be covered and some.

This is more or less a variation on a theme of 7up. They are the sussed generation. Coming up in a couple of days. Meantime here's the site: Reporting South Africa I created- which will soon run the radio and tv documentary
Posted by Dr David Dunkley Gyimah at 9:13 am