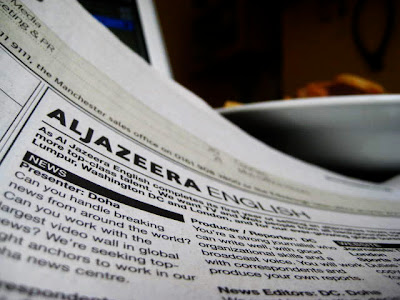 They're hiring a plenty over at Al Jazeera International. I have been to their office a couple of times to see them at work.
Today I'm hoping to talk to Riz Khan - one of its presenters. Er' it'll have to be Chatham House rules when I do. I have been watching AJ. Not as much. Hey 24 hours in the day, you know!

Riz won't mind me saying this, but at heart he's a vj. He shot a couple of docs from Afghanistan and we once spent a TDB ( till day break) ie all through the night editing a doc on The Hajj which was played on the BBC World Service.

The big question obviously is when AJI will eventually get into the US market. A new administration perhaps? But the fact they're on a second major hiring run suggests they're here to stay.

Before AJI was set up and Riz was at CNN Interntional he said something that was pretty instructive.

That small adjustment is a huge shift in thinking - something AJI is keen to see.

I would like a creative job in my Favorite TV channel Al Jazeera.
I would like Produce the diferent type of Programme for my Channel.

hi,
i would also like to have a job at aljazeera and contribute to my utmost but i have no idea how we can apply for the job.
thanx.