Scott Rensberger is in the house ( I'm going all show bizz now). A snippet of his work on the front page of viewmag is from a gun fest he came across and then shot. It's er pretty something to watch. There's a full other package which is equally rivetting. Man after Katrina refuses to leave his destroyed home threatening to shoot anyone who comes near his property with any number of assault weaponshere

Scott doesn't like the term video journalist and I undestand why. It's limiting. But he does the whole nine years as well. We met in Bilbao, Spain and had a good exchange. We even shot an exclusive in the Guggenheim museum - including of all places, their toilets. Yep I'll confirm that's an exclusive from the T of the G. Take that Mr L. So give it up for Mr R. 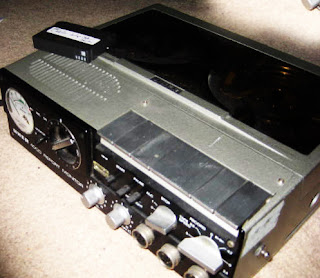 I have just found some archive tape on my trusted Uher from when I used to produce/present a BBC London magazine programme -includes some really cool interviews with the likes of the Late Fela Kuti and Mario Van Peebles and various film directors. I'll post that soon.

I showed my uher to some of my most recent students. Yep you guessed they were horified at the thought of any radio journalist lugging one of those around, but we did, we did. . .


*L =Letterman
Posted by Dr David Dunkley Gyimah at 2:54 am