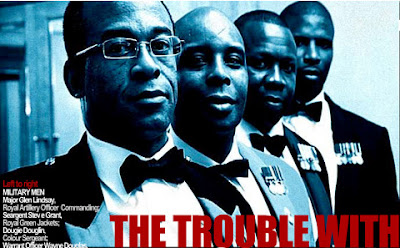 I've been invited to a channel 4 talk in a couple of weeks where I'll raise aspects of future TV.

Some programmes can be extraordinary, but because the broadcaster has only so much time on air, they have to move on, leaving you feeling you wanted more.

So why not piggy back a good TV programme by making your own item to respond or move the debate further on. It's not the height of creativity, but there's an audience waiting for you.

Broadband Video on the Net will result in programmes like this: remake/mash ups of BBC progs like, The Trouble with Black Men

It addressed issues that were broader and caught the attention of he BBC and viewers when we put it out.

Newspaper have been running spoliers for years. Net programmes piggying Broadcasters is not so common, the majority tend to be spoofed up (e.g. a host of Star wars fights on You tube)

So look through your TV schedules and find out which one's popular and remake it to address your issues
Posted by Dr David Dunkley Gyimah at 7:59 am