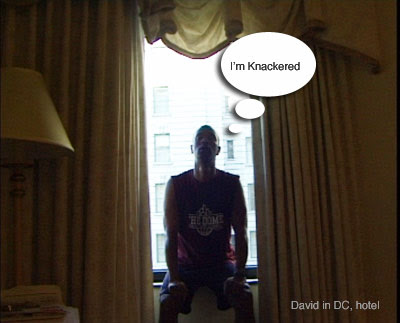 If you could hear the sfx, cuz here I'm out a breath. In DC, a little while ago, I decided to go for a morning run. In fact if there was a blog for insatiable joggers (journalists who blog - geddit! Ah well) I'd probably have a bit to say.

DC though offers one of the best scenic routes, Berlin wasn't bad either. But DC it's the White-House - Lincoln Memorial, the Korean War Veterans Memorial, onwards and then a big loop back.

In fact I thought wouldn't it be cool if you had one of those antishake cameras mounted so you could record the scenes as well. I sound like Forest Gump don't I?

One of BBC Radio 4's Commissioners asked if I had an idea for any features and I couldn't help propose this. It's such a bizarre idea it might just work.

I think I'm going to call that "Last words".

Get yer running shoes out!
Posted by Dr David Dunkley Gyimah at 6:50 pm