Young people get their news from the web - USA Today reports That Young people turn to the web for news, reported byUSA Today should come as no suprise, though you know there will be a few execs tututing.

Trend extrapolate those findings and the future looks er, not very bright.

More staggering is that knowing this you'd think TV execs would think about cross linking as an idea.

Julia is an old colleague from the Channel One TV - Videojournalism revolution days of 94.

The screen she's presenting within is neat, with wide TV estate - doing, er, nothing.

Similarly Fiona Bruce, BBC TV would have presented a news programme, in which many of the items would warant further attention and could possibly expand its coverage online. 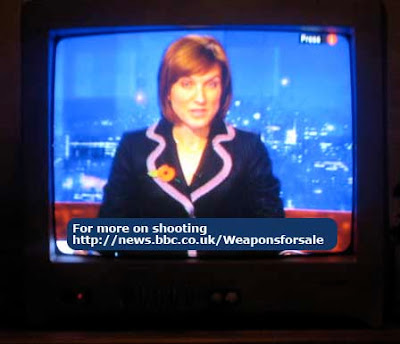 So what would it take for execs to have a link below the screen telling you where you can pick the news item from?

Yes it's a no brainer, but it's a cross link from one media to another.

Likewise online for those appointment TV people tell em what they could be missing at the scheduled 10.00 pm

Paradigm shift was the post before this, talking about current Masters student. Paradigm shift is what one suspects TV land could do with.

And by the way I went across all the channels - all hybrids of one another. . . no wonder young people get their news from the web
Posted by Dr David Dunkley Gyimah at 11:29 pm