Best of the BBC 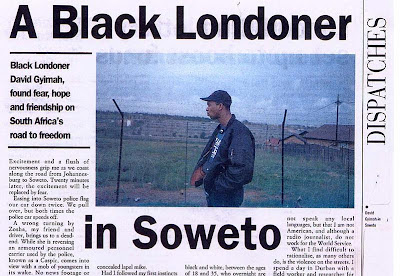 David reporting for the BBC's internal magazine, Ariel, in 1992 whilst on assignment in South Africa for BBC Greater London Radio where he was a presenter

It's being looked upon as the night of the long knives.

Working in news has never been safe, in and out of the office, unless you rise to management level, and even then. . .

I spent a considerable amount of time working and freelancing at the BBC from 1987 to the late 90s.

Knight of the long Knives 01
In 1999 I went through similar nerve-racking moments as a regular freelance journalist at BBC New's main oposition, Channel 4 News.

C4 News was in contractual negotiations over staff quotas, coupled with a bid to tighten its news budgets.

And inspite of how managing editor, Guy Ker, would describe my contribution, I was one of many producers dropped.

Network News may be one of the most exciting areas to work, but when it implodes on you it's like the sky falling in.

I may have my hands fairly wet with new practices such as video journalism and multimedia, an irony in itself as managers believed I wasn't serious about news production because I was learning to edit or shoot, but I still feel for friends and others going through this process.

What they don't tell you about News
Part of the strength and achilles of working news is its division of labour, its dependency on the chain of command, its specialism and in some sense its narrowness in the media playground.

There are many very clever people working in this field, but you'd be hard pressed to find huge communities who can physically travel the workflow of producing news and media by themselves.

These aren't my words but that of friends hiring in the creative zone, frustrated they say by impressive CVs but individuals not being able to do many of the things you, media savvy 20 plus year old takes for granted.

That is shoot.cut.code.mix.publish either on the net or with Final Cut for podcasts.

Many staffers will be seeking jobs in PR, others will have to change careers entirely.

That's life and it happens everywhere.

There's no such thing as a job for life, however the inevitability and turn around to this state of affairs will be a mental and physical assault.

If you're young with the veneer of invicibility about you, then you've probably care little at how precarious the media world is.

You can always go somewhere else, can't you?

But we make our bed and lie in it.

Al Jazeera's Riz Khan ( former CNN anchor) says this is the most exciting time for news hounds and that they need to wrap their heads around all the digital stuff.

"I envy you he says", in an interview I'll post pretty soon.

So here with more postings this week a look back for me on some of the golden days of working in the BBC, with early film from Reportage, a programme that shaped future BBC factual TV production.
Posted by Dr David Dunkley Gyimah at 7:11 am