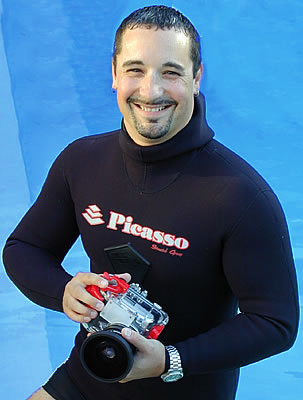 His name is Cliff Etzel -an award winning photojournalist in which he describes himself as visual content creator since 15 years of age.

"While there, I was 1 of 15 special merit award winners for my work. In addition to working as a Video Journalist, I am a certfied PADI Rescue Diver and an I.A.F.D. Certified Freedive Instructor. I also publish the only website on the Internet devoted exclusively to shooting video underwater - UWDV.COM"

As a water baby and free diver, Cliff and I whom regularly swap notes and emails, is onto something.

I'm PADI but nowhere near Cliff's qualifications, but have pulled off some wreck dive expeditions, one of which was sold to the BBC.

So the combination of videojournalism and advance diving skills puts Cliff in a catergory of his own.

If you're planning an expedition, sea-environmental project, want to take a crew to Antartica or are from Dive Magazine (Is John Banten still around?) then Cliff could be your man.

Hail the immersive videojournalist (I-VJ)
Posted by Dr David Dunkley Gyimah at 11:44 am

Don't know what to say mate - Thanks much

I'm now blogging specifically about the Immersive VJ paradigm with an emphasis on shooting while freediving and musing on what it takes to shoot, edit and deliver for the web from a less is more perspective.