A very British history of Videojournalism 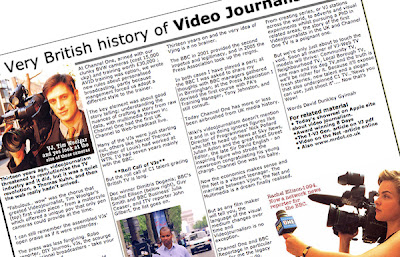 A very British history of videojournalism probably warrants a slim book. There's a lot to be said. The title says a lot for me as it's always been a reluctant media form, but belatedly has found growing support

You could argue it started in 1994 with Channel One TV, but you could go further back to the 60's the Cliff Michelmore era and a BBC producer film maker Percy, whose surname I should dig up.

In 1992 working on reportage the programme used hi8 to film, and then there's the BBC's Correspondent who would disguise herself as a member of the cloth to film clandestine stuff on foreign assignments.

But 1994 is an epoch moment nonetheless.

Channel One modelled on New York One was a revolution, like Today's Telegraph studios, which has never been replicated. It did however attract all the major broadcasters from around the world, attempting to model their outfit on a sation whose budget was miniscule compared the networks.

Remember also if you didn't know the first VJs in the UK belonged to a newspaper company, Associated Newspapers.

The press loved and loathed us in equal measure and such was the vehemence from broadcasters, Channel 4 and BBC, that it would take another seven years - a bidding war between the BBC and Channel 4 - to gain the services of Rosenblum and re-introduce the format in the UK.

At Channel One, much to Rosenblum's annoyance, we were being taught one aspect of videojournalism only to be told by management to adopt a televisual convention.

There are I say today at least three identifiable genres of VJism.

So here's an account - a personal one with film from the era - which I will expand upon.

The originals from the Channel One TV still meet up but many have gone on to carve out big careers in the media.
Posted by Dr David Dunkley Gyimah at 5:14 pm