Cult of the Amateur 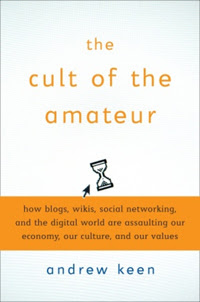 Andrew Keen's book is doing the rounds and getting new wind after the raft of first wave interviews.

A neccessary addition to the counterpoint of web hubris? Or has he got it all wrong? You decide.


This is what he says on his site:

"My debate with Chris Anderson author of the Long Tail was both published and broadcast in this morning's San Francisco Chronicle.

I have the highest respect for Chris. I think he's done a brilliant job recalibrating Wired's message and his Long Tail is an extremely smart and elegant argument that is revitalizing mainstream media's interest in technology.

The only problem is that he's wrong. He's wrong that we are on the verge of a cultural renaisssance. He's wrong that the digital revolution will provide people with more viable avenues to become professional writers, musicians and film-makers. Most importantly, he's wrong that amateurism benefits mankind.

As I will show in my Cult of the Amateur, we are teetering on the edge of catastrophe. Blogs, wikis and social networking are, indeed, assaulting our economy, our culture and our values. Web 2.0 is pushing us back into the Dark Ages".
Posted by Dr David Dunkley Gyimah at 10:47 am