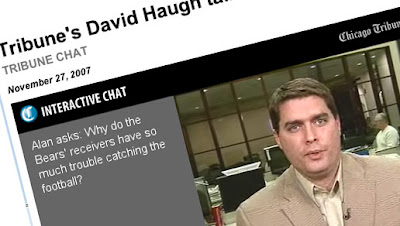 For the legions of online newspaper et al sites with adroit presenters, Chicago Tribune (CT)makes the first land grab.. ok one of the first.

The idea - presenting at Apple a couple of years ago was simple, reinforced by a bloke called Dave who had a programme called Blog Roll where punters blogged in and the presenter spoke to his audience.

Occasionally, you might get one of them on the phone or skype and exchange a few words.

Ideas though are one thing - I'm speaking about me now and my smarty wazz pants thought - but doing it, well, that's what separates the doers from the talkers and Chicago Tribune has showed its digital doer status more than we can remember.

My favourite from its multimedia camp is a MM doc looking at oil.

But to the present and et voila, this pops out nicely.

'Course TV does its own version e.g. Good Morning America et al, but it's a fair bet the costs at Chicago are minscule.

The hard work comes from the software and team fluidy knitting it all together.

This is an idea which will take off, with bloomburgesque info attachments doughnuted around the screen and what it will do is out the most enormous pressure on TV once again.

Yes some of them won't be worth the screen we're looking at, but Chicago Tribune's for instance will redefine dip in TV, respond at will, as we know it.

CT's Mark Hinojosa comments about this some really special features to this set up:
1. Look at their Youtube Channel
2. "There's an on demand, which is built from the live version so lets you pick which question you want to hear the answer to. The snap polling is the newest feature. If you watch it live you can vote and see instant results in the chat window".