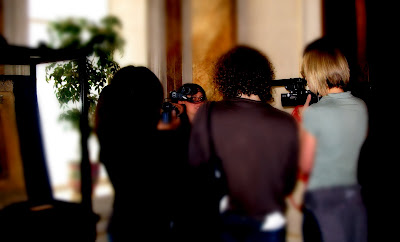 We have Howard Rheingold and the RAND to thank for the term in the manner which I'm using it: VJ swarms, where groups of VJs are pursuing the different stories but taking angles on the same person.

A trite intimidating, but I show this picture for another reason.

Working over in Soho with an MD - an Ex Saatchi head - promos and advertising were the rage.

A peculiar, but briliant set up for ads was the tilt- shift effect, which enabled you to produce the most striking pictures where a section of the same plane would be out of focus.

Equally the set up would create the impression that the image was a miniture box set.

It's been used brilliantly for shots near the Tate Gallery London and the bridge that spans North and South London.

But you can go some way, as highlighted by Helmut Kobler in Wired to achieving something of the same effect, which I have done with the inage at the top.

Seect the gradien tool and reflected gradient from the top tab

Press the quick mask again and apply a guassian blur from your filters.

To get the staurated look.

Dup the image in the layers pallatte

and apply multiply from the layers tab and play around with the fill.

Alternatively nip over to Soho for the whole set up
Posted by Dr David Dunkley Gyimah at 4:10 pm