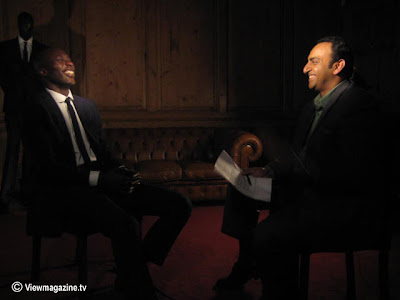 I hadn't seen both for a while and today we got to meet up and have long chats about everything including multimedia.

Riz Khan doesn't make much of a deal about it now, but around 2002 was an early videojournalist shooting in Kabul and the Hajj.

We would spend late nights editing film for transmission for the BBC World Sevice.

Ozwald the designer I have known since 1982, but haven't seen him in years, but is now, aside from his bespoke tailoring, into making films and various multimedia extravangas.

For his Givenchy collection, where he was Creative Director, Ozwald mixed live performance with animation he directed.

There is a lengthy video I have shot behind the scenes of Riz's interview with Ozwald for his Al jazeera show.

Riz's interview which will be on his AJ show in the future covers a lot of ground and is both informative and thoroughly entertaining.

It would not be proper to reveal various exchanges, but if you get to listen to it, we were all in stitches at Ozwald's account meeting HR the Queen

My shoot with Riz provides the opening for the multimedia piece I'm doing for the Press Gazette, which should be completed soonish.

I'll be playing some of the tips and advice he offers up anc coming journalists to my Masters class, before posting also soon
Posted by Dr David Dunkley Gyimah at 7:20 pm