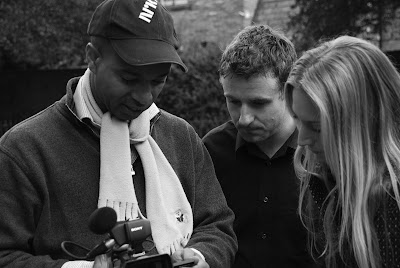 In 1979 I saw my first conflict. I was caught in the middle of small arms fire with some of my college cadet colleagues

In 1992, this time armed with a sony and hi 8 I was in the townships of South Africa evading conflict between Inkatha and ANC supporters.

Since then I have had further scuffles.

One things certain, as my VJ stripes got dirtier and dirtier, I've come to realise vjism is not a glampuss job.

If you want to practice Videojournalism on foreign, even domestic assignments, be prepared to get into the trenches.

At its heart we can cover stories of any nature, but Vjs immediacy and gonzoism ( that doesn't translate as unprofessionalism) offers a raw, up close and personal way of capturing stories.

No glamour, no airs and graces, but the photojournalist of old and new, jeans, trainers an attitude and armed with a cine capturing device.

Today I said probably my last byes to a group I have known for a year.

They were students when we met up and now they are that no more.

I had a frank, but neccessary discussion with them, that I would not normally have.

You own this space. You make your own rules. What you know surpasses what many are unaware of, in radio, broadcast, magazine, newspapers, online, CSS, Mashups.

Some have found jobs, others are in the process, but I have no doubt all of them will find their calling.

It really is an exciting time to do journalism, to really break some eggs
Posted by Dr David Dunkley Gyimah at 7:42 pm