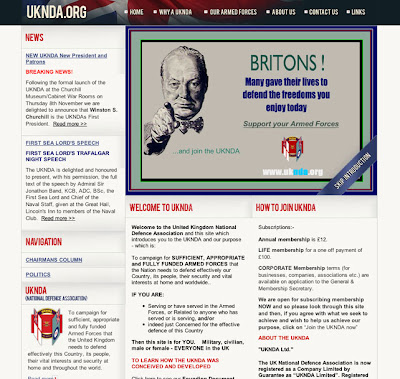 A month ago, I was forwarded a letter from an Intelligence Analyst, the contents of which spelt out deep concerns within the UK's defence budget in maintaining a "proper funded force".

The letter ( below) highlighted how unusually a triumveriate of senior former defence figures and an ex foreign minster had come together to raise their concerns about over stretching and underfunding in the Forces.

They are General Lord Guthrie, Marshal of the RAF Lord Craig and Admiral Lord Boyce as well as ex-foreign secretary Lord Owen.

I have posted an extract. The rest was written as a private communique so I'm observing partial rules of Chatham House - which I have been a member of for about 14 years.

What's instructive and informative about this letter is how in the space of a month it's developed into a full headsteam campaign, with the BBC's online site prominently displaying a full page story page and its flagship radio news and current affairs programme, The Today Programme, giving generous time to an interview with Lord Guthrie at 7.40 am. How did it get there?
I can only speculate, but there are key indices.

They are a powerful assembled lobby group, though concerns about budget-cuts in the Forces are no where near new.

I recall in 1996 being one of the few journalists in the UK invited into Command Control in Northolt as a showcase of the UK's new rapid deployment force.

It was there also the then Defence Secretary Michael Portillo announced stringent cuts as part of a defence review.

News execs are legendary for steering clear of "talking heads" senior military personnel 'bemoaning" the demise of their forces.

So being a non partisan group, that would have helped.

However, there's also been a number of news reports highlighting casualties of UK forces in their major twin campaigns.

The News Machine
News managers would not have overlooked the currency of the group's message in the wake of a damning Oxford Coroner's criticsm of the government for the unlawful killing of a 19 year old Fusilier.

Then the news revealed on the front page of the guardian that the government's minster of defence equipment and support Lord Drayson had quit his job to race cars in the US.

On air all Lord Guthrie would say is that he thought Lord Grayson was "frustrated".

And perhaps somewhat surprising for what could be termed traditionalists a rather snazzy web site ( Lord Guthrie doesn't mention it though) yoked to the stirring passions of that most patriotic of British songs festooning the Last Night of the Proms, Land of Hope and Glory.

Though the aformentioned were not strongly connected to the lobby group, it illustrates how within the media turn of events, seemingly unconnected, can act as a catalyst and be threaded together to create the maths formula that often governs news reportage.

The story has legs now. Expect to see it across all major channels and hold its own, with the prospect of a slow crumpling train hurtling towards the Ministry of Defence.

A month and some to mount a news worthy profile is a considerable feat.

It occurs to me that this might be something to which you may care to lend your support!

Some three months ago I was approached by Cdr. John Muxworthy RN (rt'd) who, together with a group of retired officers – all deeply concerned about the serious underfunding of Defence – formed the UK National Defence Association, in the hope of bringing pressure to bear to remedy what, I am sure you will agree, has become a critical situation for our Armed Forces. They asked if I would agree to be their President. Since this is a matter about which I feel passionately, I agreed without hesitation.

The sole aim of the UKNDA -- Tri-Service, All-Party -- is to create a public head of steam for a proper funding of Defence. . .

In an excellent Newsnight programme on 6 Sept., Gen. Sir Jack Deverell twice made the point that there was "very little pressure from the public" for increased funding for the Armed Forces. That is precisely what the UKNDA hopes to remedy by becoming a mass-membership organization, tapping a large slice of the 15M of our fellow-citizens who are serving, or who have served, in H.M. Forces, or have family or friends who have done so.. . . .