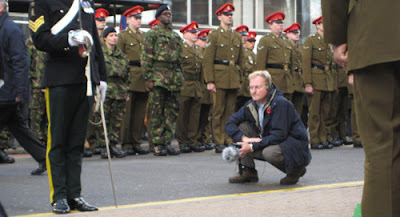 David Berman from the Croydon Advertiser takes sound and prepares to take a pic. Below, I'm getting David to explain the process 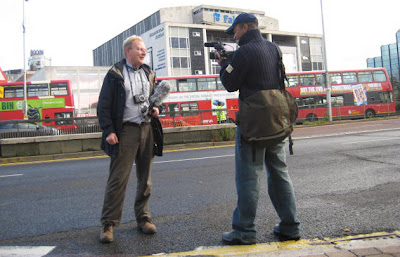 One of the main planks of a piece I'm putting together on Multimedia had me down at the Cenotaph in Croydon.

David Berman, Chief photographer at the Croydon Advertiser has devised a series of Sound Slides and yesterday's events gave me an opportunity to see how he and his colleagues work to produce them.

If you're in the US this is a no brainer, but in the UK market very few newspapers comparatively, per the total number on the market, are using this multimedia methodology as effective as the Advertiser or Sitbonzo - the site which hosts their work.

Thoroughly nice man and his colleagues, why else would they work on a Sunday :), also took me through the process and it afforded me the chance to look to make a short film about them - stand alone to the bigger film.

It's not rocket science he says. But by the end of three plus hours shooting etc, they were putting the finishing touches for it to go up. And here it is, Remembrance Sunday Very nice and very solemn.

Two interesting things to look out for.

David and his team of photographers have editorial control, and place a good degree of value from their managers in acknowledging their work.

What is multimedia, why do we do it and who cares is the angle I'm taking.
Posted by Dr David Dunkley Gyimah at 8:29 am

Thanks for your nice words. It was a pleasure having you hang out with us.
The other shows we made for remembrance are also now on the site so, we have a package of 7 soundslides, interviews with 6 veterans and remembrance parade.
sitbonzo.com