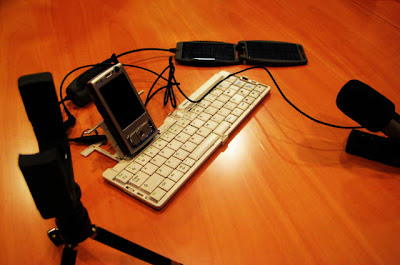 A lot of things can happen in er a day.

Thanks to Peter Ralph at shooting by Numbers who had me in stitches and still has when he emailed me a response to a my earlier missive about the trailer for "So you want to be a multimedia journalists?.

Cmon Peter it was the high definition version that came in at a miniscule 7mb, which is why I sent an ee out.

Fab - that's all I can say. An art in how to bring a fellow brit down a peg or two - fantastic.


Reuters
Yesterday's Reuter's Online News Association gathering was lovely - not a word I use often.

The whole set up with two hours of Q and A with four/five of their team walking us through the whole mobile phone correspondence kit.

Good turn out of heavyweight writers/ journalists and bloggers as well. Kevin Anderson from the Guardian, Martin Stabb from Press Gazette, and that talented multimedia correspondent Tim Overdiek.

Apparently the ONA's been growing at rate of knots.

Someone needs to correct me but some 45% in the last year and most of that out of the US.

Anyways so what I liked about the talk was the honesty from the Reuters crew; we're trying this out and we haven't mastered eveything, but we're looking at what it can do, they said.

I think I jumped on ilicco their mobile products manager when a point came up about neswpaper journos prefering the Nokia system to the A1 HDDV cam I use.

Video's not for everyone, yes, but those who have taken it - some 200 plus to date - are doing some fine work. I can give a fuller list in later postings.

Anyway others weighed in.

What are limitations in bandwidth?

Do the phones have a built in stabiliser to minise shake?

How long do the batteries last?

In the hands of Citizen jo it'll be formidable - the whole kit looks like a point and click affair.

Only pressure I can see is from the I-phone - which I have seen at work from Robb Montgomery.

Now that is special.

A question about quality and camera steadiness was a red herring according to Paul Brannan (BBC); if the shoot is newsworthy who cares - his point?

Reuters grabbed interviews with William Gibson ( Cyber), Vince Serf and Peter Bazelgette ( Big Brother Boss) and aside from some film motion - me thinks it has something to do with the chroma shift or compression ( what do I know) - it looked and sounded fine.

That much was talked up today by marketing mogul Ricky Chopra from Quba.com talking to Commercial Music undergrads at Uni.

I gate crashed to see if I was missing anything in SEO, which he discussed.

Ricky, confident in his presentation spoke about the dash for digital downloads i.e. everyone wants to be on mobiles and how bluetoothing films, at festivals etc, was becoming the norm.

You can even go mobile: all you need is a back pack with a transreceiver, cost about 1400 dollars, and a laptop and some poor soul to lug it around.

Anyway what happens when you get passed by the cyborgy person is you get pinged with "hey here's my film", if you've got your bluetooth device on.

Does that mean Web sites will soon become redundant ?


The New Marketeers
But the best part of his talk involved the subversive area of "article marketing".

Mmmm the art of creating a buzz around your product by conversing with your market in "clever" somtimes underhanded ways.

The more savvy of you will recall Loreal and Microsoft's debacle, so it has huge negatives.

The positives: students can earn around 3200 dollars a month for "article marketing" around their blogs, and says Ricky they drove traffic from 1000 a week to 2000 a day or thereabouts when they took on a campaign.

I have got to get more facebook friends. Damn!

Meanwhile at the same time a department head went all google adwords today. Took us minutes to get on - further linning thoss nice levis pockets of google.

How much are google making from ad words alone - really - nice!

Intercontinental classrooms
And then back home Robb Montgomery from Visual Editors ask if I'll skype into a class he's taking so we can talk multimedia.

We're back where we started because I'm somewhere near producing this multimedia piece I have been banging on about- but meanwhile get some of this. 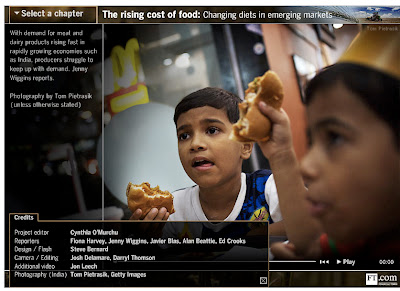 The FT have pulled a big multimedia bunny from the hat: The Rising Cost of Food I like this. And I'm sure you will to, particularly as it addresses a huge topical subject with such clarity and style.

yes yes the FT are friends, but this is still brill
Posted by Dr David Dunkley Gyimah at 6:35 pm