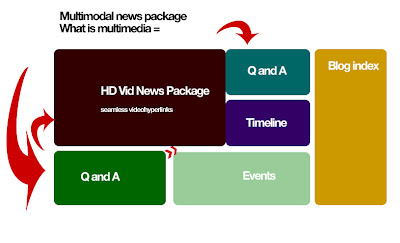 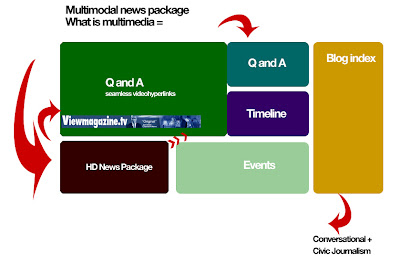 There's a lot I don't like about this already, but as a first brain dump it should, most likely will change.

I'm producing a piece for the Press Gazette's Dominic around multimedia. The piece is likely to be a linear video.

For a presentation next year at Cultural XChanges, I hope to have built something germinating from this.

From working in a newsroom, Channel 4 News, Newsnight, ABC News and so on, there's a lot I think I can pull out which may have some use to an application with embraces teh conversation both in and out of the news construct.

The Past and Present
Old timers of BBC Greater London Radio will remember an innovative lunch time news room, which attempted to recreate and sometimes create the drama of finding a news story and reporting it, in many cases even chasing up the interviews and keeping listeners informed.

It was a brilliant and only on rare occasions gimicky in deconstructing news in much the same way as Zoo radio, again practised by another GLR stalwart Chris Evans in the early 90s.

So taken by the concept that when I was made a presenter on GLR circa 1990-92, myself and co presenter Sheryl Simms tried all manner of disruptive radio techniques to garner listener interests.

But this is all about the conversation here.

Civic Conversation
I'm drawn to the civic journalism movement of the late 90s- early 2000 from J-lab which sought to dig deep into the heart of journalism and redefine how we do what we do to make reportage more wider and inclusive.

Paul Bradshaw eludes to this conversation in his brilliant blog on 21st Century newsroom.

Conversations are indeed circular and never ending and if you've visited my posts in the past you'd have come across my despair for the set agenda which wall gardens what's important enough to be on the news agenda.

There has to be a better way. The Channel One model - a juke box of news - meant you could still see your linear flow of packages, but the producer could cherry pick at will throughout the day.

Today, we'd give over choice to the consumer so you'd flick over to the running order you so desire, with the editor's recommended choice still there for your delectation.

Aristotle's legacy of narative weighs heavily here; a beginning, middle and end whilst living in Ghana for many years, I know the traditional delivery of news in the villages IS conversational, picked up by elders and pushed along by gatherers at nodal points in the discussion.

There's something to be said about that. News pieces are not fixed, and often what happens off camera; the gathering process is equally interesting and influential.

So back to the above; each screen is expandable. cf Ted Talks

Influences
The secondary influence is a piece of work made in 2000, The Family.

On the main news package are video hyperlinks ( See Trust in the Media package .

Within the interviews are nodal ports that allow you to drill into the 5-10 minute interview, which allows you to segue back into the package.

The timeline of events gives an account of how recent the story is ( this is an abstract), as well as how the story unfolds.

News as we know doesn't just happen, at least the construct. There's a whole discussion going on

For instance, rejections from those who don't want to contribute, and then a shift in emphasis towards accommodating a new objective, the hunt for new voices (always a prob for broadcasters) to explain matters.

In newsrooms, this often takes on a voyeuristic quality.

On one of the big stories in the early half of the 90s concerning child abuse, one senior figure who was needed for Newsnight, needed the tacit agreement of the government to come on the programme.

Some of the background stories, indeed may be difficult to tell.

When does the news start and stop? When do I tell my interviewer we're on the record; infact we're always on.

But those can be worked out.

Two things quickly: firstly in the multimedia piece I can show behind-the-scenes chat ( the work up to the interview) between Ozwald and Riz (khan), as well as Riz and Gerald Scarfe - Sunday Times... fascinating. ..

Also I'm closer to an experiment with one of the UK's biggest news brands to provide a timeline of a news event - done non- linearly - all of which I hope make some point about circular and the spatial news.

In effect multimodal, multi-entry and multi-mashed-up-media pieces, which could as a great many people are doing already make the playing field of broadband ( article for Journalism.co.uk) pretty interesting.
Posted by Dr David Dunkley Gyimah at 12:36 pm