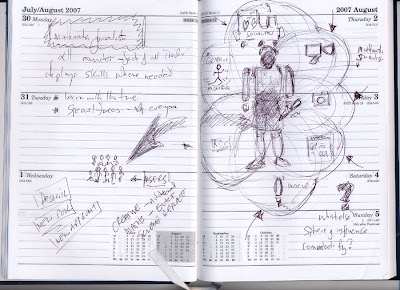 The doodle needs clarifying, perhaps soon I'll provide an illustration, but what it wants to do is to explore the overlapping quadrant between the seperate disciplines which it's suggested in the media now make up multimedia.

As I have mentioned in previous posts, computing and graphic design have a different outlook to what we as journalists regale in as multimedia.

But this in itself suggests some difficult questions in journalism not just in offering a multitude of media, but a canvas and discipline positing a multi approach and mesh designed.

Adrian Holavaty is someone who so obviously occupies that space. On his now famous ChicagoCrime.org, we would now want Xml data pulling in video to correspond with the crimes.

Within the video report video hyperlinking would provide greater detail about events and suspects, and so on.. .

But how to build that, and when and where?

Paradigms are never comfortable and don't be alarmed please, I'm not sggesting the above is.

One minute the earth's flat, next someone's telling you it's round.

Paul Bradshaw offers a paradigm for his 21st century newsroom; you either get it or it might take a while, and when it doesn't work for you do not be dismissive.

I still recall the words of the then Head of BBC News Interactive Richard Deverell saying we haven't scratched the surface of this new medium the web and what it has to offer.

Multimedia journalist - a jack of all trades and master of all.

A bit like a special forces solider - skilled in the use of many things at a high level, but a specialist in one area.

And the act of swarming in small units for the multimedia journalist would work just as well; popds of three four people, putting out whole multi-entry packages, rivalling thw work of 30 team broadcasters.

Hey john get the google map up, Can you correlate it with this breaking stuff. Tag this station. Use the video synth to create the events timeline.

Tufte is someone worth reading for visual design
Posted by Dr David Dunkley Gyimah at 10:08 am