Video shooting in London ? You must read this 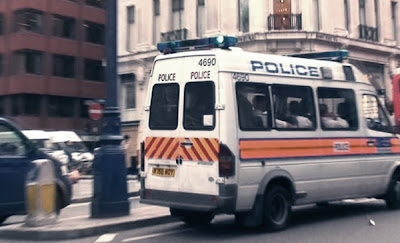 If you ever plan or have shot video, particularly in the City of London, expect to get stopped by the Police.

And it matters less whether you're holding a small DV Camera or are the Financial Times.

In one of my assignments with the FT, three of its VJs were ordered twice by different police to produce some ID and a chit showing they had permission to film.

If you're a film crew, yes. If you're a journalist not obstructing public pathways etc. no.

The last set of police we encountered were not prepared to budge when we demonstrated aptly who we were.

Now I have a communique from one of the UK's leading Media Lawyers, himself also an Editor, and a senior figure in one of the UK's largest news outfits saying in effect: THE POLICE HAVE NO JURISDICTION TO STOP YOU FILMING ON PUBLIC LAND.

Careful Now
But, beware they may still find ways of scuppering your vital shoot on the day.

Firstly by quoting a law that does not exist, and if you resist while making the call to the City of London Press Office, issue you with a fixed penalty notice for obstruction.

Best bet, play it cool and note the badge number.

On the other hand, lots and lots of police men and women are very accomodating and will balance the risk of querying you against the backdrop of terror in the city.

Read below. Many many thanks for Mike's help here

I spoke today to the City of London Police press office and was told that there is no need for journalists and broadcasters to have consent from the Corporation of London for filming in public places (not all areas of the City are public, I gather).

In the event of some police officer telling you otherwise, ask him or her to contact the force press office and ask about the current guidance.

If you have any problems, please let me know, so I can take it up with them directly.

The press office did stress that it was reasonable for an officer to check that people claiming to be journalists could show that they were working for a media organisation, or doing media training.

This states, in paragraph A 1.2.12: (I have added the emphasis)
A.1.2.12 Photographers and broadcasters Press photographers and news broadcasters have a right to take pictures or
film wherever they wish, so long as they are in a public place and are not causing a public nuisance or an obstruction.

Police officers have no legal right to prevent photographers or news crews from taking pictures during any operation or investigation, if they are outside police cordons.

If there are legitimate concerns that photographers and/or crews are getting too close to a crime scene, the cordons should be moved.

Police officers should work with the media, where possible, to assist in providing them with a reasonable vantage point as this will make management much easier. If difficulties are experienced during handling of an ongoing incident, officers should contact the media liaison officer.

The force website is at: cityoflondon.police.uk - go to News and Information in the centre of the page and click on Media Centre.

When that comes up there is a red box on the right of the page marked Download (PDF) which contains the Media Relations Policy document.

Hope this is of some use.