But then the man standing up stage is probably one of few who's seen the long plank of wood Obama uses.

If Professor Paul Green, Director of the Institute for Politics at Roosevelt University and a political analyst for WGN Radio in Chicago wants to leave academia full time, I'd wager he's got a guilt-edge career on the talk show circuit.

You couldn't laugh hard enough and in case you're wondering this was politics - a particle physics journey into the underbelly of US electioneering.

This was contemporary vaudeville politics delivered to a modern day audience. Superb!

Dim the lights and imagine you're live at the Apollo or the London Palladium, except we're at Chatham House, that august institution whose name is lent to the sonorous Chatham House Rule.

You know: the information you're hearing, you can't tell anyone where you got it from or reveal the speakers identity, except the wordings more taut, but stolid enough to scare anyone into thinking you're part of an exclusive club.

BBC Reporters often make good of Chatham House rules and speakers from attending closed talks. As a producer I know I have. 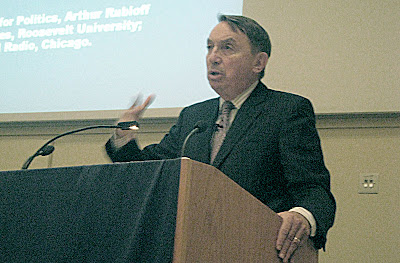 Professor Green spoke about how Obama beat Clinton; how McCain doesn't have an in with value voters, a karl Rove manifestation of people who make decisions based on religion, abortion, capital punishment and same-sex marriage.

Shot on a Canon Ixus 70
And in case you might be thinking this was a partisan lecture, he criticised liberal women reporters for their snobbish approach to undermine Republican VP runner Sarah Palin. And that McCain had given good as he gets, just that he's not so zing in age.

"Attack her [Palin] for what she says, not for who she is", he said

This is what Chatham House does best, attracting the best minds to share an insight into their rarefied world. Professor Green's been to more political gatherings and party nominations than perhaps he can remember.

As a member of Chatham House, and I have been since 1994, I'm pleased to see how video has become a feature of their events.

In fact it's been one of the ongoing points I have had the pleasure of talking about to previous directors to the current one Dr. Robin Niblett:

For the many years I was a news producer, Chatham House became a regular haunt, with a healthy number of speakers being invited onto Channel 4 News, a move guaranteed to earn me browny points.

Were I still in network TV broadcasting I'd surely be ringing up the news editor to suggest getting Prof Green on the programme.

I'm told the video of Professor Green's speech will be online soon, but I also feel speaking to Chatham House's events manager, the institute could increase its reach online by having some of its video downloadable, with a creative commons license [ link back to us] and the company logo.

And truth we don't have much of that around, at least from what I saw today and believe me, you'll want to see this.

Postscript:
The press and boggers came in for a ticking off, but if you want to follow the campaign with real indepth articles Professor Green recommends Realclearpolitics.com a listing of the best articles around.
Posted by Dr David Dunkley Gyimah at 3:31 pm