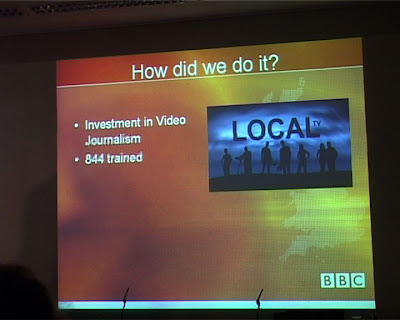 His presentation was rich in statistics and polls indicating how well accepted a VJ trial programme in the midlands, Birmingham, had gone. 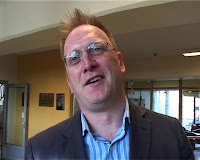 I later interviewed him briefly and will post that sometime this week.

Local TV, the more acceptable term used within the BBC to describe their move into broadband news reportage will have a huge effect.

For news competitors it also presents a significant challenge, highlighted here couple of days ago.

At a time when ITN News is pulling out of the regions, the BBC will be able to display its hegemony without contest.

While like millions I'm reliant on BBC News and its many productions, I temper my news intake with variations from other sources.

Notwithstanding what local newspapers will have to offer, Local TV will be a playground all onto the BBC.

That must be a good thing at first as it'll illustrate how breaking down national news into truly hyper local interest should be. 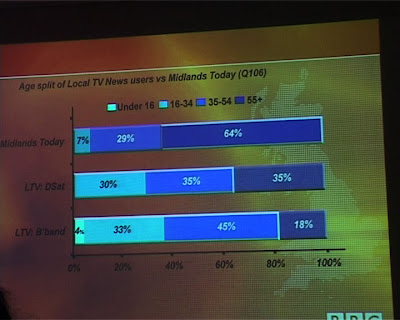 Or reporting on matters for communities e.g. disputes over trash/rubbish can be far more relevant than national matters.

The trouble is the cost to run such a programme could be prohibitive to any outfit contemplating new entry into the news market, that is if they want to run a national campaign.

Region by region, it's different. Newspapers already have the infra structure and local reach, but perhaps not the video reporting clout, website support and triple play potential.

Yes, a thoroughly good report could quite easily find itself going from community to regional to national: bottom up rather than top down.

There is one thing I believe newspapers could do and that is to adopt an agency approach.

Mirror the BBC's activity by offering the best and some on a dedicated web site, which could be accessed at local levels.

I'll talk more about this with Tim's interviews as well as Michael Lally, RTE's head of News', bold citizen journalism experiment, the likes of which have not been replicated anywhere else I know off.