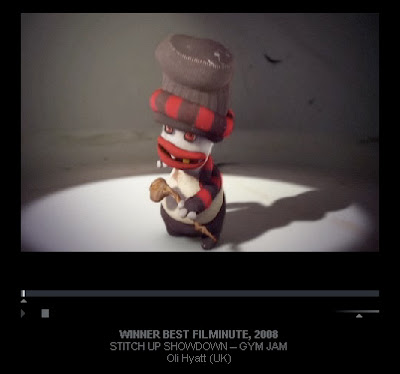 Meanwhile this press release from Filminute, which has found a winner

LONDON/BUCHAREST, October 12, 2008 – Maniacally competitive sock puppets, an innocent take on the proverbial “quickie,” and a sci-fi rendering of the wonders of antacid take top honours at Filminute, the international one-minute film festival. The 2008 Filminute Awards were announced today at a live event at the Orange Concept Store in Bucharest and on a televised special on ShortsTV in Europe.

Viewmagazine.tv helped in producing a pre-awards show, now being shown on Adobe's player with interest from a TV network

Determined by a worldwide audience from more than 90 countries, Filminute’s People’s Choice Award goes to Hungarian director Pici Papai’s QUICK, which looks at an adult relationship through the eyes of children.

Posted by Dr David Dunkley Gyimah at 6:39 am